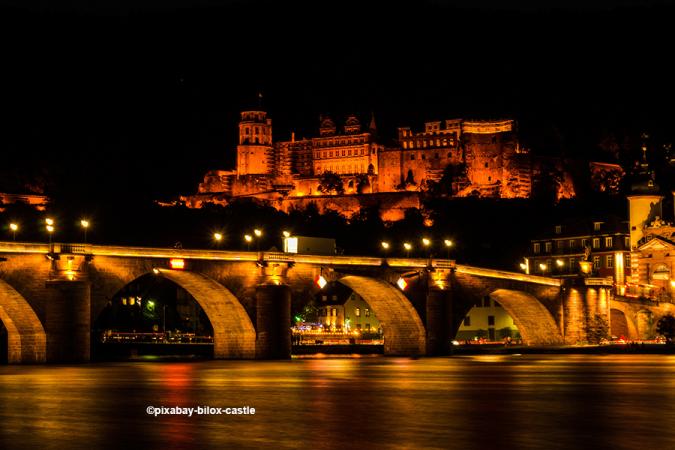 If you ever lived in the Rhein-Neckar region, then you know that one of the summer highlights is the Heidelberg castle illumination. Three times every year during the summer months (June, July and September, right after nightfall), the spectacle attracts thousands of viewers annually and countless of boats and ships that sit on the Neckar to watch the fireworks. 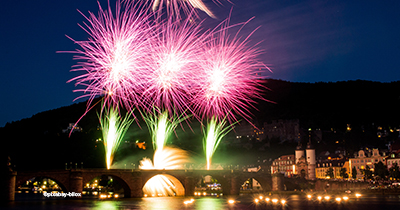 The best spots to watch the show are along the river banks, the Philosophic trail, the Theodor Heuss bridge and of course from a boat on the Neckar itself, but if you ask pyrotechnician Thomas Fischer the best spot is on the Neunheim side towards the Heidelberg College, in an Interview with the Rhein Neckar Newspaper, where he revealed his favorite spot. If you are interested in one of the boat cruises, check out the many Neckar river cruises online and book your tickets early, there are several different companies that offer Neckar cruises on the night of the illumination in their program.

The castle illumination, as you can see it today, is a reminder of times of war here in Heidelberg, as well as times of celebration. The first firework was held in July of 1613. In honor of the English Princess Elisabeth Stuart, that married Friedrich the fifth on February 14th, 1613. The newlyweds arrived in Heidelberg by boat and landed on the north bank of the Neckar river, they traveled across the old bridge towards the city of Heidelberg. The firework to welcome them to Heidelberg is said to have lasted over 2 hours.

The English did a trial run of Bengal fire on May 22nd, 1860 and after a successful run they held the first Bengal fire illumination of the Heidelberg castle. Since 1860 the castle illumination and fireworks are happening regularly. 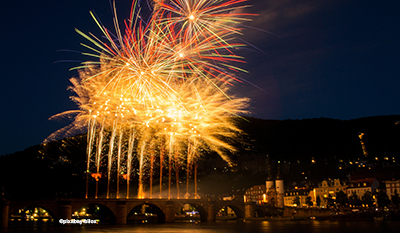 At 10:15pm a loud bang sets off the show (this is actually the start signal for the 30 guys to light up the 90 Bengal fires), followed by the red flaming Bengal fire that turn the castle ruin fiery red. The fire is a reminder of the destruction of the castle during the Palatine succession war (1688-97). French troops had set Heidelberg Castle and the city on fire in 1689 and finished the job in 1692 by blowing up the remaining castle walls and towers. After 6 minutes the fire burns out, the firework show begins with a brilliant array of rockets launched from the bridge. The actual firework show lasts for 10 minutes.

In 2013 the castle illumination had its 400th anniversary.

Public transport is really the best way to get to Heidelberg on a busy Saturday, you can depart the bus or tram at the Bismarktplatz stop and walk along the river until you find a good area to sit but beware that it gets crowded fast. If you prefer to travel by car, arrive early and take advantage of one of the many public garages in the city. Many people bring a blanket to sit on and even a small picnic. The castle illumination dates for 2018 are June 2nd, July 14th and September 1st and they start around 10:15pm, making it a great opportunity to spend the day in Heidelberg sightseeing or shopping and finishing it off with the fireworks before heading home. Just remember the old bridge will be closed off due to the technicians setting up there.