5 Things You Need to Know About Driving on the Autobahn

If there`s one thing Germany is famous for, it`s the autobahn. Started in 1929, it now spans more than 12,950 km or 8,047 miles across the country, even crossing into Belgium, The Netherlands, Denmark, Poland, The Czech Republic, Austria, Switzerland, and France (but always watch for tolls when crossing into other countries). Really there are few places that can`t be reached using one of the world`s most famous highways - and the autobahn can offer you a fun, fast, and at many times scenic roadway to your destination. So feel free to hit the highway, go on that amazing road trip you`ve always dreamed about! Germany offers you a wonderful four seasons and plenty to do - but before you go, here are a few important facts - and busted myths - about driving on the German autobahn.

The Myth: That Germany`s autobahn is a free for all, no rules, regulations or speed limit, race track. BUSTED.

I`m sure when you found out you`d be living in Germany many of you dreamed about putting the petal to the metal on Germany`s unlimited highway; and while it is true that some sections of the autobahn are unlimited, this isn`t the case for the entire autobahn. The normal, or recommended, speed for most of the autobahn is 130 kph or 80 mph. It`s important to always pay attention to the road conditions and any warning signs you might see. Even when the speed limit is non existent you can`t just go crazy; German roads can be very curvy and narrow and there are plenty of rules in place to keep everyone safe. For example, slower traffic must stay to the right, and you can only pass on the left - yes this is the law. It allows for a very organized and safe flow of a traffic on most parts of the autobahn. Traffic jams or "Staus" do still happen of course, but following these easy rules will get you to your destination, fast, safe, and sound.

What to do when someone flashes there brights at you...

Remember, the left hand lane is generally reserved for passing only - there are some exceptions when heavier traffic is involved but German`s take this rule seriously, so don`t just cruise in the left lane for no reason, stay to the right.

What to do when the car in front of you suddenly turns on their four ways...

If the car(s) in front of you suddenly turned on there four ways, it most likely means there is a traffic jam ahead, time to slow down and turn on your four ways as a courtesy to the driver behind you. Once the driver in front of you sees you have turned on your four ways, he`ll turn off his, and you can do the same once the car behind you is made aware. Hopefully you won´t be stuck in a stau for too long!

Sometimes your GPS may take you off the highway earlier than expected, many get live traffic updates so it may be taking you a back way to avoid that stau!

What to do when you see a speed limit sign with an attachment...

You may see a speed limit sign with an addendum attached at the bottom or a conditional speed limit. The most common addendum is "Bei Nässe" which means "When Wet" --This speed limit is only in affect when the road is wet, otherwise follow the previous speed limit (or unlimited notice).

For more information about Germany`s different traffic signs and signals check out: http://www.gettingaroundgermany.info/zeichen.shtml

There will also be reduced speed limits anywhere you might get gusty winds, icy roads, or high density traffic. Have fun, but be safe! As always, pay attention to the speed limit or you just might get flashed, Which brings us to...

While it is highly unlikely for a German cop or Polizist to pull you over for speeding, you may just get flashed. Germany is known for it`s, sometimes hidden, speed cameras; they are in almost every major city and on many parts of the German autobahn. You`ll often find them as you exit the autobahn and are entering the city (where the speed limit will be reduced to 50 kph). It`s called getting flashed because you`ll see a quick, bright, yellow or red light. Everyone gets flashed at least once, and it`s not the worst thing that can happen to you, but try not to make it a habit. Most likely, you`ll be sent a lovely letter from the city, with a small black and white photo of your face, and your license plate, and asked to pay the fee. Which typically isn`t more than 20 to 40 euro depending on your location. These tickets do not affect your car insurance (horray!) and they usually don`t result in any points being taken off of your license (yipee!). I say usually because it all depends on how fast you were going, more than 21 kph over and you`ll start to see higher fines and points taken away. If you are military (and the car is registered on base) tickets can sometimes get sent to your chain of command. Once you get the ticket, don`t just let it sit there, many can incur late fees if not paid on time. It`s really nothing to worry about unless you are driving WAY too fast in a limited area.

German radio stations will often have traffic updates, as well as "Blitzer" warnings around the hour. Learn just a little bit of German and keep an ear out for phrases like "Es Wird Geblitzt in (Enter City or Street)" and "Stau Meldung für (Enter Highway or City)". Lastly, if everyone else around you is slowing down, especially the locals, you may want to as well! They always know where the hidden cameras are.

3) Gefahrmeldungen and Why They are Important...

You may be absentmindedly listening to the German radio when a "Gefahrmeldung" (Geh-Far-Meld-Ung) comes on. Often songs and news reports will be interrupted for these. It`s a warning message, something dangerous is going on somewhere on the autobahn. Usually these messages will be repeated at least once, so pay attention to what area and highway they are taking about. Usually the most dangerous warning you can get is that of a Geisterfahrer (Guy-Ster-Far-er) or Ghost Driver - no this is not some spooky urban legend happening. It`s a "Falschfahrer" (Falch-Far-Er) or someone driving on the wrong side of the highway. This means they are driving into oncoming traffic. Other warning messages you might here are of "Kinder" (children) or "Tiere" (animals) being on the highway or "Auf der Fahrbahn." The message would come out something like this: "Autofahrer bitte aufpassen, auf der A3 Kinder (or Tiere) auf der Fahrbahn." So you can get an idea of what to listen for here`s a few of the words broken down: Auto- Far-Er / Bit-Eh / Awf- Pas-En/ Kinder / or Tear-Eh / Awf / Der/ Ah/ DREI (3).*

Along the autobahn you`ll find plenty of places to relax and refuel. Rest stops, or Rasthof/Raststätte can generally be reached every hour or two spent on the highway. These usually include a Tankstelle (Gas Station), a restaurant (or at the very least a snack bar), a bathroom (WC), and a convenience store. Most will also have payphones and a few grassy areas to stretch your legs or let your furry friends out for a potty break (remember to keep all dogs on a leash and to clean up after them!) Some stops might have picnic tables for use, or maybe even a playground, shower facilities, or a hotel. Many of the major stops will be open 24/7. Just like in America you`ll see signs on the highway indicating what services this stop has to offer. It`s also important to note that many of the bathrooms will cost you! Usually it`s 70 cents to use the restroom and in return you`ll get a clean bathroom and a 50 cent voucher for the store. So if you`re not one to keep change on you, keep some loose euro change in the car! In case this is your first time getting gas in Germany, you`ll pump first and then pay, leaving the car at the pump when you go inside. Make sure you take note of your pump number and practice your German numbers 1 to 10 (though they`ll most likely understand your English perfectly). Most major gas stations will take Euro cash and card! Remember, that if you are military you can get tax-free gas with your Esso Card! Just make sure you`ve left at least a $1.00 balance on the card.

This way if you`re ever in a gas emergency you can charge it to your card and later pay it off at the Shoppette. Esso stations can be found in most places in Germany, but not everywhere, so plan your trip accordingly. You can search for an Esso station using your GPS or pick up an Esso map next time you get gas! 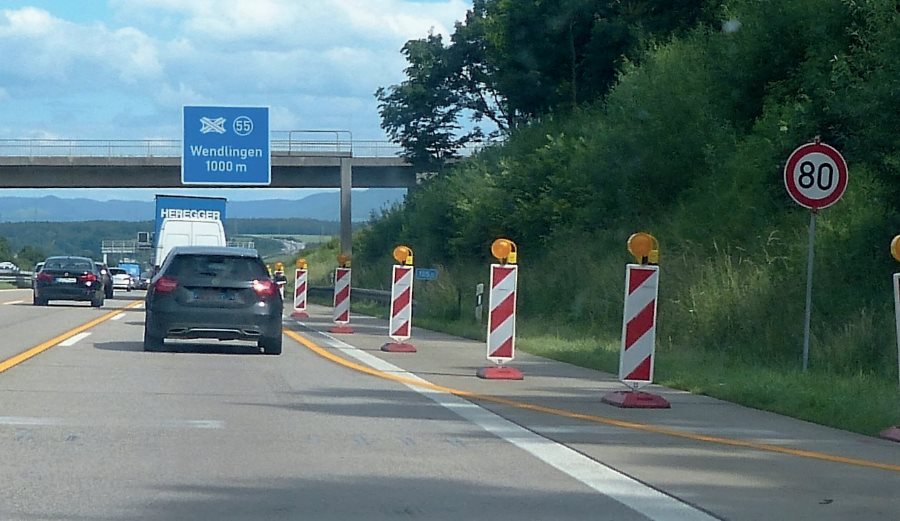 Last but not least, here is some information on Germany`s on going construction. Maintenance of roadways is an everyday part of life in any developing country but at times it may seem that a certain roadway is undergoing never ending construction. Some two way lanes of the autobahn are being upgraded to four way lanes due to high demand. This can take years, especially when construction workers don`t work nights, in bad weather, on holidays, or Sundays. Generally a Baustelle will be set up so that the construction workers can work on one, and then the other side of the roadway, and this usually means stretches of the autobahn where traffic is reduced to one or two, very narrow lanes. Trucks are not allowed to pass and anyone scared of tight places will want to stay on the right as well. Speed limits are reduced, and yes, there will be cameras and higher fines for anyone caught by a Blitzer in these areas. In the rare case of autobahn closures follow the "UMLEITUNG" or detour. This will be marked with a sign that usually has a "U" and a number. Usually detours are short and the autobahn is never kept closed longer than it needs to be!

Okay, now it`s time to pack your bags and hit the road! Enjoy your time in Germany!

You may notice me breaking down German words into sounds for you, I try to write it in a way that someone with an English accent could read it and understand the German sound. I`m bilingual so this isn`t always the easiest task for me, but I try to use my understanding of the two languages to make it readable. Still, it`s very difficult to do and nearly impossible to teach someone a sound through paper. This is the reason the phonetic alphabet was created  - however, not everyone is familiar with the phonetic alphabet and at times it can look just as foreign as the language you are learning. I hope these spellings can at least help a little in understanding German pronunciation. Feed back is always welcome and appreciated, so feel free to email me with any questions, comments or concerns at This email address is being protected from spambots. You need JavaScript enabled to view it.