When Grandma had to fix it 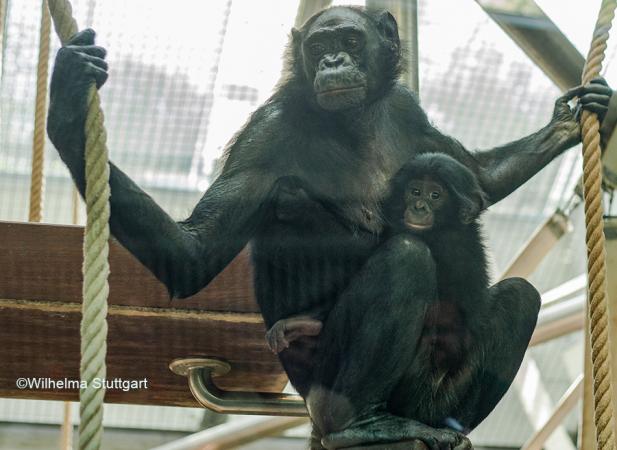 Frankfurt Bonobo baby is finding a family at the Wilhelma. When Grandma had to fix it. Hopes are that the reunion with his grannie Kombote will be the fix for the little Bonobo from Frankfurt. Xhosa will receive his second chance to grow up with his kind in the zoologic-botanical garden Stuttgart. The first steps have been so promising that he is not viewable for visitors too.

Xhosa had a lot of bad luck in the first eight months of his life. Even though his mother Kamiti, one of Kombote’s daughters, had no problems accepting her earlier child, she did not want to raise her youngest son. After 6 days the Frankfurt care takers had to take in the infant, because he was getting weaker and weaker. They had to bottle feed him and event though they tried everything to reunite him and his mother, it was not meant to be. Hopefully one of the females of the large Bonobo group in the Wilhelma will adopt the little one. This is why the European preservation Society recommended the transfer. 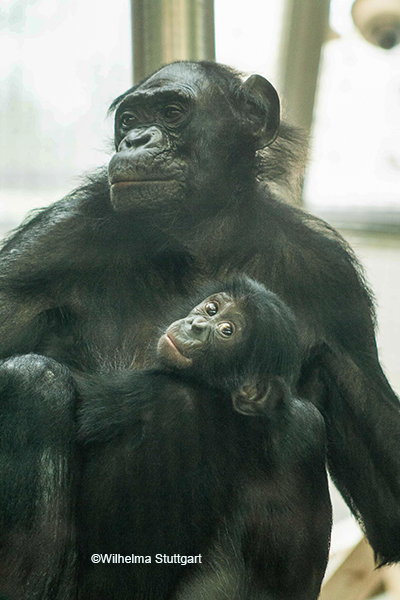 Haiba for example, would be a great match. She was born in the Frankfurt zoo herself, back in 2001. To initiate the fist contact, the caretakers also put Komboto in the enclosure. She is the boss in the Bonobo troop and responsible for the group dynamics. Bonobos live by the rules of the matriarch. “Surprisingly it turned out to be the 50-year-old Kombote herself, that the bigger interest in Xhota.” Curator Marianne Holtkoetter adds. Kombote is already has great grand children and should be free from mother’s duties, but she carefully looked to establish contact with Xhosa. While he was shy at first – she was lovingly trying to come up with ways to play with him, instead of just grabbing him. Territory manager Bea Jarczewski adds: “Kombote is a senior after all, but here she acted like a child. She approached him with her head lowered, tried to animate him to play with a ball and even pulled a sheet over her head to make him curious. The ice was finally broken when she pulled him onto her tunny with a blanket, picked him up and let him kick in the air. He was giggling so hard and has since been attached to his Grandma.”

The curator is thrilled about the development. “It could have not gone any better for Xhosa”, Holtkoetter adds “If the matriarch takes him into his care – it would give him great protection in the group.” Male juveniles don’t have it easy in the Bonobo troop without their mothers. It is important for young apes, that were bottle-fed, to be integrated into the group. Otherwise they won’t learn the species typical behavior and will have problems getting along with the other apes in the troop. This is why the caretakers limit the human contact to the max. Since Kombote can’t nurse her grandson, she will bring Xhosa to the edge of the enclosure. There the caretakers will bottle-feed him through the fence. Other then that Xhosa can stay within the Bonobos.