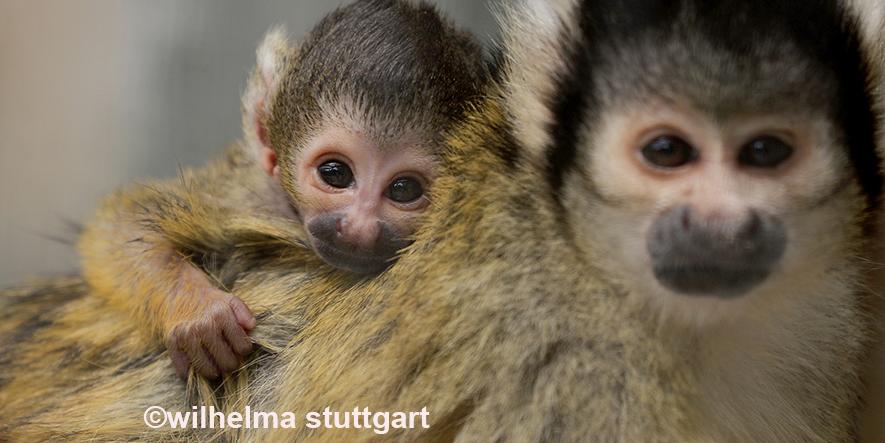 The squirrel monkeys at the Wilhelma are showing off their three little ones. Responsible is: Frenchman Illamp;, the current male, joined the little popular monkey group on the sub-tropical terraces, after moving here from the southern French zoo de La Barben. Now the first results of the union are visible: between the end of April and mid-May, three infants were born and are being carried around on their mothers back.

This is, where the squirrel monkeys are the happiest in the first four weeks of their life. After that they will be carried around by other females in the group also. Unlike others, these habitants (the monkey moms) of the south American rain forests, share the babysitting duties. The aunts give the nursing mothers some much needed relief and the older sisters and cousins of the offspring can practice their skills for later – at 3 years the females are sexually mature. Only the males stay away: they normally are not involved in raising the young, just in their making. 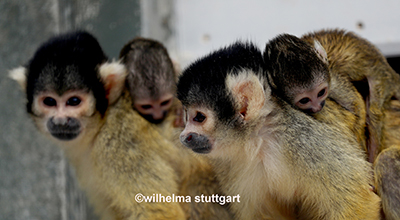 Illampu, which is named after a Bolivian mountain, was born in 2010; he was recommended by the European endangered species program (EEP) for the conservation of the rare black-headed squirrel monkey in Stuttgart. The program has been around for over 18 years and is responsible for the exchange between animals in the European zoos. Usually it’s the males that get to go on trips. They normally leave the group after 3 years again, after their own daughters become sexually mature. This is the case at the Wilhelma too, Illampu is the successor of Zlotan, whom was taking care of making offspring in the past 3 years. The females normally stay together for life.

Thanks to the latest additions, the group of the black-headed squirrel monkeys on the sub-tropical terraces, has grown to 15 animals. In their native home South America, the “monkey troops” can count over 100 members. The members distinguish between themselves with scent IDs, where monkeys rub urine in their tails. Their menu is quite versatile: it contains everything from insects, snails, birds, frogs, eggs, fruit and seeds. Sadly, today all 13 species and subspecies are endangered.