Majestic wheelies at the royal park. Mating season of the Indian peafowl at the Wilhelma 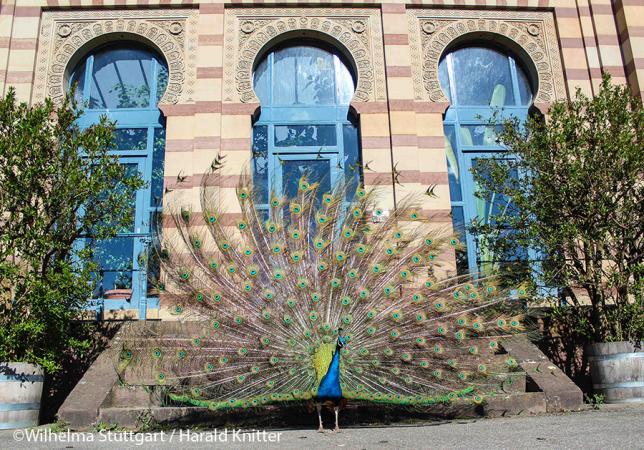 The Wilhelma visitors are almost mesmerized by the sight of him. Will he do it or not? Spectators gather by every Indian peacock and wait anxiously if he will show of his legendary display of tail feathers. Right now, is the best time of the year to observe the cock with the most flamboyant plumage of the avifauna ruffle his feathers into a gigantic fan display. At the moment and during the next weeks, the males are intensely wooing the females for attention. Even though the stunning display is meant for the hens, humans seem to be very drawn to it also. 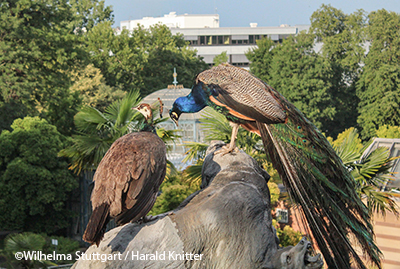 The eight peacocks are allowed to roam the park freely and prefer hanging out at the prettiest spots. The most awe-inspiring moments by far are when they show of their displays in front of the Moorish buildings. In front of the picturesque backdrop they represent that special factor that makes the Wilhelma, the modern zoologic and of course botanical garden, while at the same time - originating from a royal sanctuary. Just as the constructor Wilhelm I. of Wuerttemberg gave in to pompous splendor during the construction, the peacock takes advantage of its majestic appearance and extravagance while showing of his feather crown. The tailfeathers by themselves only reach around 40 centimeters in lengths. The cocks neck and chest glows in a breathtaking sapphire blue.  But the stunning up to one-and-a-half-meter long train, with the trademark eye patterns, of upper tail feathers is reserved to the males only. Depending on the direction the peacock is facing the sun, while displaying his feather fan, his feathers will shine either gold or green. 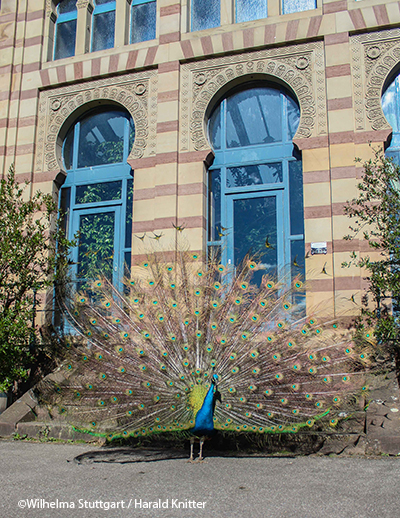 Just like the exotic Moorish buildings, the peacock brings the oriental flair to Stuttgart. Originally the Indish peacock lives in the Dry Forests of India. But Alexander the Great brought them to Europe during his conquests during antiquity. The exotic fowl was not only kept for eye candy, but also as culinary delight. The Roman people in fact enjoyed to eat them so much, that they were bread in large numbers around Rome. Even later on in European royal court, centuries later, they were considered a delicacy and very valuable. Another connection to the Wilhelma is that, King Wilhelm did not quite keep a menagerie, but owned several chickens and pheasants, which he built the Damascene hall for them. It is not clear if he also kept peacocks, though.

Even if the peacocks are not visibly the center of attention, you can still hear their catlike calls though the park. While the birds are pretty patient when it comes to taking photos, visitors should not stalk them. If they feel threatened or closed in on, they will defend themselves with sharp claws and beaks. Visitors that want to own a peacock feather, have to buy them in the zoo shop or the kiosk at the farm. They are imported from fowl farms in India.