Youngest Bongo calf is exploring the outside for the first time 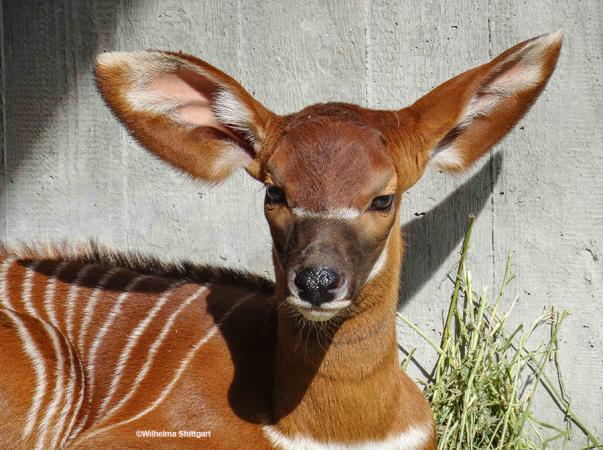 The Bongos in the Wilhelma seem to be enjoying their enclosure, that was renovated in 2016, very much. Those extremely rare forest antelopes, here in the Stuttgart zoologic-botanic garden, had a baby again this year…just like 2017. Mother Asante gave birth to a calf on March 16th. Daughter Amarie carefully set her hoofs on the outdoor enclosure for the very first time this week. There are only about 100 east African Bongos left in the wild, they exclusively exist in Kenia.

The newborn Bongos lay still in the undergrowth to avoid detection by predators. Instead of following the mother animal around, they stay on straw in the nesting box for the first couple weeks. The mother just stops by to nurse. In the wild of east Africa this behavior saves the infant from danger until it is old enough to be able to flee. Amarie has started following the small Wilhelma herd to the outdoors this week. Under the watchful eye of the Bull Tambo in the enclosure next-door, the calf and her mother Asante are discovering the outdoor enclosure and is meeting her older sister, Uzuri that was born last year. The cows Cindy and Wilma with her son Robo are also part of the group. 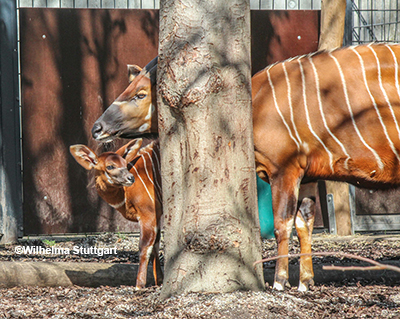 With the clear differentiation according to age the grows stages of the Bongos at the Wilhelma are easily comparable. The Bongo calves are born wearing the distinctive auburn short coat with the almost parallel white stripes. The play of light and dark provides the perfect cover in their natural habitat of forests. Just like the other Bongos, Amarie is sporting a seemingly brushed thin strip of hair. She is still missing her horns which make her already huge ears look way out of proportion. As of right now she can still walk under her mother’s belly. The yearlings Uzuri and Robo on the other hand are almost shoulder height to the adults. And they have visible horns sprouting. At the moment they are only about 6 inches long and it will take a while until they grow to the final lengths of about 3 feet and develop their typical twist.

The 2016 built African style Bongo enclosure of the Wilhelma, with its brush and stockades, offers plenty of opportunities to hide for the shy animals. Spyholes in the screening wall give the visitors the opportunity to observe the bongos closely.

The systematic destruction of their habitat and poaching have diminished the numbers of the forests antelopes massively. The breeding programs of zoos have helped immensely with the preservation of the species. Today there are about 700 Bongos in zoos all over the world. there have been about 50 Bongo births in the Wilhema since 1980.