Welcome to the biggest party in Stuttgart this year! 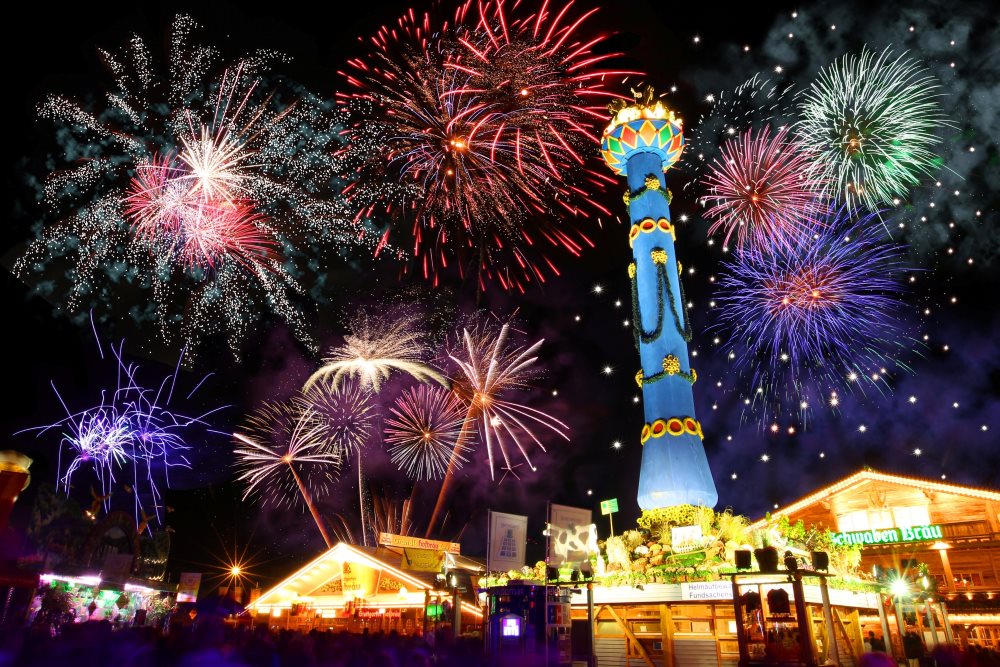 The Stuttgarter or more specifically Canstatter Volksfest is one of the largest beer festivals, second only to the Oktoberfest in Munich. Even the Stuttgart natives don’t say they are going “to the festival” (auf´s Volksfest) but instead say they are going “auf den Wasen.” The Cannstatter Wasen is the area between Mercedesstraße, the Neckar River, the Gaisburger Neckar Bridge and the King Karl’s Bridge. Already two to three months before the festival, the large beer tents begin their set-up. There are more than 300 vendors total, and taking the vendors’ suppliers into consideration, more than 17,000 people are there to guarantee the approximately four million visitors a once-in-a-lifetime festival experience. More than 20,000 Volksfest club members (former German emigrants and their families from New York, Philadelphia and Chicago, but also former Soldiers that were stationed in Stuttgart or in the surrounding areas) regularly visit the Cannstatter Volksfest in order to renew and strengthen the ties with their friends in the area.

Be careful during the Volksfest, Frühlingsfest (spring festival) and Fasching (Mardi Gras) times... very careful! During these times of year, the police will regularly stop and test you for a sobriety check around the Stuttgart area. As the parking spaces around the festival are limited and people who park illegally are towed, it is also your best bet to take the public transportation.

From the main train station (Hauptbahnhof), the U11 leaves every 10 – 15 Minutes directly to the Volksfest. 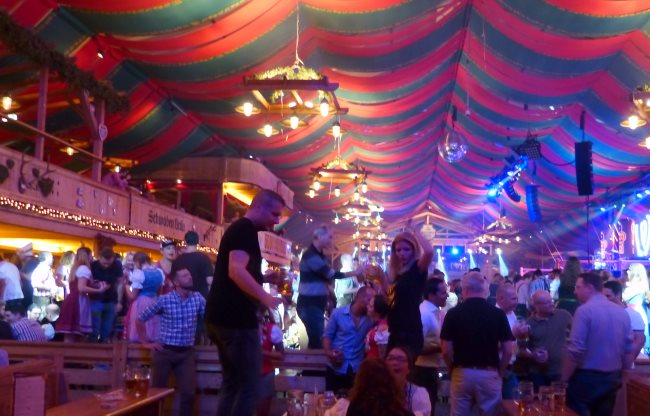 If you will be going with a group, a good meeting point is at the „Fruchtsäule“ (the pillar decorated like Thanksgiving) that stands in front of the large beer tents. The Fruchtsäule ist THE emblem of the  Cannstatter Volksfest. Already at the very first Volksfest in 1818, there was a tall, looming pillar decorated with lots of fruit, grain and vegetables. It is a symbol of remembrance today that the origination of the Volksfest is that of an agricultural festival.

At the Volksfest the following are not allowed: dogs (except for seeing-eye dogs), weapons, knives and bottles. One should also avoid bringing large bags or backpacks for security reasons. Bags will be checked by security or the police.

Almost 200 years ago, on September 28, 1818, the first Volksfest was held. It only lasted a day and was more of an agricultural festival with horse racing and awards for livestock (like at a county fair).  In the years to come, it just kept getting bigger and bigger and after World War II, in the 1950s, the celebration was lengthened to ten and then 12 days; since 1972 it has been going on for 16 days and since 2007 the Volksfest has been lengthened to 17 days with the opening ceremony on Friday instead of Saturday. 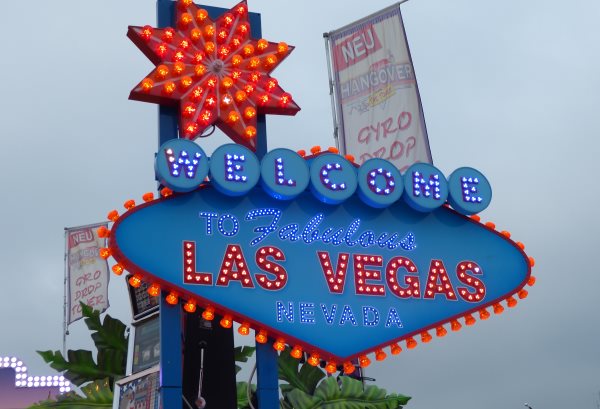 Wednesday is the best day to visit the festival when you are going to be taking children. The fest features a Family Day every Wednesday including reduced prices and events aimed at smaller children.  There are many rides that are safe for kids, such as the carousel and much, much more! However, the Volksfest is not cheap. 3€ here for one ride, 2.50€ there for the carousel, not to mention all of the sweets and food options… take enough cash money with you to the festival.  Do be careful with your bags and how you handle your money as there are, unfortunately, more and more professional pick-pockets at the festival every year.

You can easily spend an entire day at the Volksfest. The paths and streets at the festival total over three miles (5km), and there is always something to see and experience.

Many stands offer food… delicious bratwurst, pizza, fish or Hungarian Langos (deep-fried dough, kind of like funnel cakes, but that can be eaten either sweet or hearty) – there is something for everyone! There are also an uncountable amount of sweets stands: chocolate-covered fruit, ice cream, waffles, gingerbread (Lebkuchen) hearts, chocolate and candy of all sorts – the choices are never-ending! 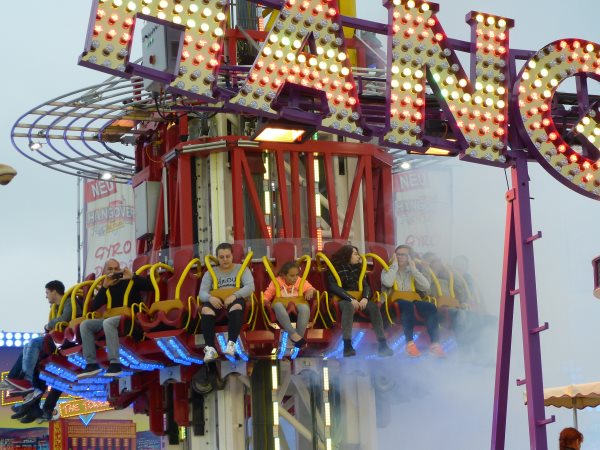 Nowhere in Europe are there more rides than at the Stuttgarter Volksfest (not even at the Oktoberfest in Munich which is the biggest in the world). There are rides for very small children where they are sure to experience something great – but also very safe! Then there are rides for all different age groups and, of course, those for adults only which require a certain amount of courage! Here are some examples: the ride Hangover, a free-fall tower, where one speeds towards the ground at 100 km/h from a height of 85m, or the large mechanical swings (what the Germans call a Karussell) that spin you around in a high circle very fast, or the rides with loopings that turn you upside-down in circles extremely quickly with your head towards the ground – don’t ride these when you have already had a couple of beers! 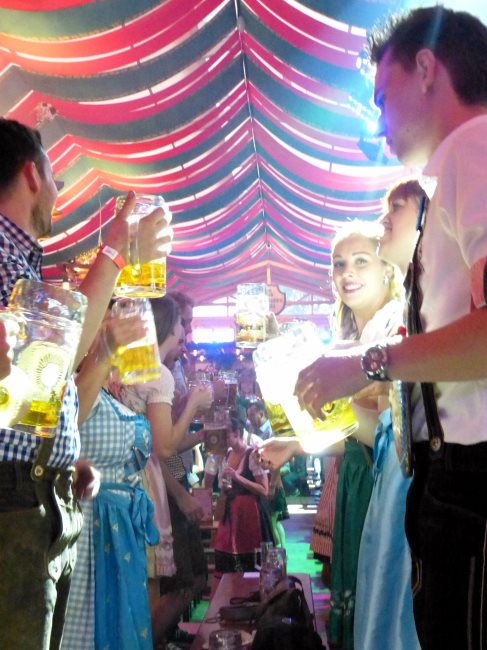 Speaking of beer… yes, there is enough beer at the Volksfest, too. Seven beer tents, two wine tents and many beer gardens await you! From Monday through Thursday one can usually always get into one of the beer tents. However, starting Friday, it is almost impossible to get a table without a reservation. Around 60% of the attendants will wear the traditional clothes, Lederhosen, worn by men and sometimes women, or the traditional Dirndl dress for women.

The Dirndl, the typical dress worn by women to the festival, ties in the following fashion:

The apron bow tied to the left side of the dress indicates that the woman is single and eligible.

The apron bow tied to the right side indicates that the woman is taken.

The apron bow tied in the front middle indicates the wearer is a virgin.

The apron bow tied in the back can indicate the wearer is either a widow or a waitress.

When the seats in the tents get sparse, one usually has a better chance of getting in when wearing “Tracht“. (Lederhosen and/or Drindl). Dirndl and Lederhosen are typical for Bavarian; at the Oktoberfest in Munich almost 90% of the people will be wearing “Tracht”. However, in Stuttgart it is becoming more and more popular as well. If you are looking for peace and quiet, then you should not be going to the Volksfest. In every beer tent, you will find a party; the visitors dance on the benches (and tables!) and there are either live bands or DJs. Judging only on how it looks optically, the nicest tent (and the largest with 5,600 seats) is the Schwabenwelt as it is has much dark, rich wood as its inner décor. If you stay to the very end in a beer tent, you are going to have to expect a wait-time for the S-Bahn or U-Bahn – and the taxis are sparse as well. TIP: leave 30 minutes before close – it is much easier then. On Sunday, October 9th there is a large fireworks display at 9.30pm to celebrate the close of the festival. Monday, October 3rd is a national, German holiday where many visitors are to be expected.