The Westvleteren 12 Trappist beer, brewed by the monks at the St. Sixtus Abbey, is one of the most coveted beers in the world by beer connoisseurs. It is also one of the most exclusive beers in the world, as the only place authorized to sell the beer is at the St. Sixtus Abbey in West Flanders, Belgium. There are websites that offer to sell the beer, but this is often at an outrageous cost to the buyer, and against the wishes of the monks that brew the beer. While in Germany, why not make a trip to the Abbey in West Flanders, Belgium, to buy some beer yourself. The beers from Westvleteren are listed as some of the best beers in the world, and twice listed as THE best rated beer in the world.

Before packing up the car and heading to West Flanders, you need to make an appointment for the beer. Along with only being able to buy the beer at the Abbey, it also requires some very specific planning and preparation. Each person is only allowed to purchase beer once every 60 days. Purchases are limited by first recording the automobile tag number and then by blocking the customerR17;s phone number for 60 days. This sounds extreme, but it gets worse. In order to make the appointment, you have to call the Abbey and request one. The beer phone is not frequently answered, so you must call during the hours when they accept calls, which is listed on their website calendar. Unsuccessful calls simply get a pre-recorded message in Dutch, followed by another message first in German, then in English advising to get more information from their website sintsixtus.be. My initial attempts to call resulted in busy signals, redialing for about 45 minutes using the redial button on my phone until I finally got an answer. The gentleman on the phone simply asked if I could be there that following Tuesday. I asked if I could come on Wednesday, and he agreed to 1500. He then took my tag number and that was it, no name, no more information, it was simple and concise. Now it is important to realize, once you have your appointment, it may be impossible to change. Also, know that the scheduled appointment will get you up to two cases of beer, 48 bottles. You could also end up with either the Westvleteren 12, 8 or their Blond beer (The 12 & 8 are listed very high on the best beers in the world). Their website has an appointment schedule that shows the beer they plan on distributing that day, or half day, but that is a guideline, not a guarantee. 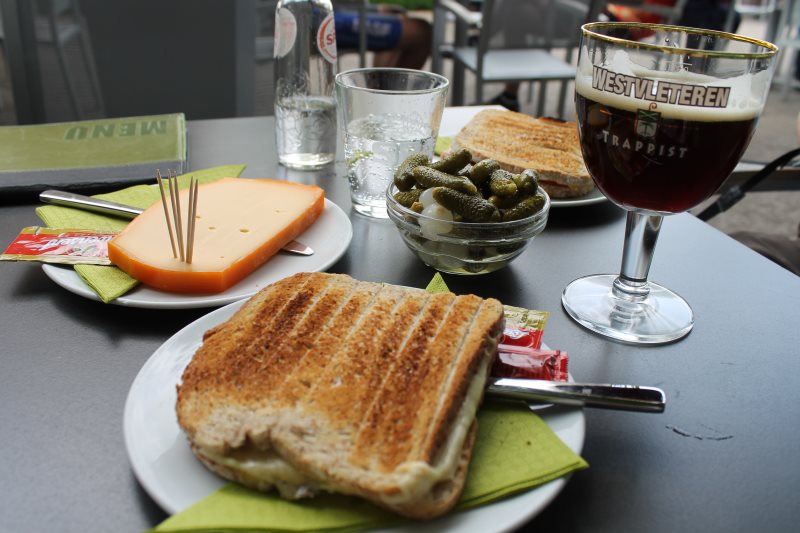 The Abbey is about a six hour drive from Stuttgart without traffic. You can opt to spend the night in Bruges, also about a 6 hour drive, and about an hour drive from the Abbey. On the drive to the Abbey for our scheduled appointment, we stopped on the way and dipped our toes into the North Sea, making sure we had plenty of time to arrive for our appointment. The man distributing the beer advised that coming a little late is not a problem, but often times people come too early, causing more traffic than necessary. He advised that they set out enough beer for all the appointments, so there is no worry of them running out.

There is a café across the street from the Abbey where you can get something to eat, as well as taste all of the Westvleteren beers. The cafe is the only other place authorized to sell the beer. The cafe also has a shop where

you can buy souvenirs, as well as up to two six-packs of beer per person, when available. Check their calendar to confirm that they are open during your visit. www.indevrede.be. During my recent visit, they had a sign posted that there was no beer available for sale. After picking up my 2 cases from the Abbey, I stopped by again to pick up a souvenir. As I picked out my souvenir, they rolled out two pallets of the beer for sale. Immediately a 15 minute long line formed behind me.

Once you have your prize beer, be advised that it is recommended to store the beer vertically in a dark place between 12 & 16 degrees Celsius and serve at a temperature of 10 to 12 degrees Celsius. The beer can keep for years and will continute to ripen. It is also advised that the beers take a year to start gaining flavor and 18 months to two years before the beers reach their full flavor. Trappist beer is not something you drink, it is something you taste. 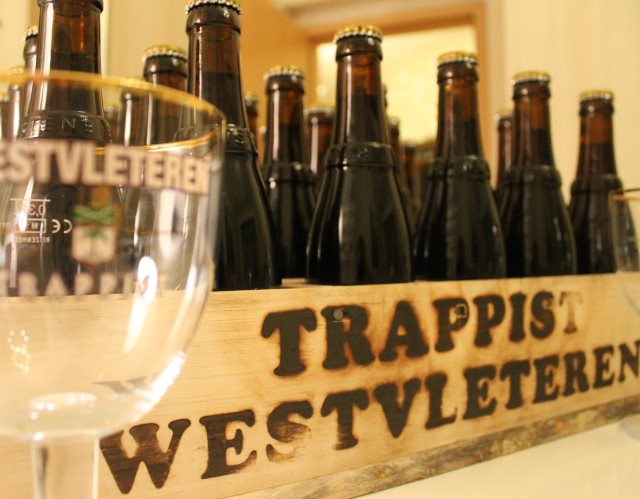 Bruges is about an hour drive to the monastery and is a quaint, but beautiful, canal-lined city that is very walkable. It is also very beer centric. You can try many different Belgium beers there, as well as delicious chocolate shops on almost every street. You can also get fresh seafood, and enjoy a Belgium favorite of Mussels with French Fries, Moules Frites. It is also the home of the Crescent Brewery www.Halvemaan.be and De Struise Brewery. Ghent is also about an hour drive from the Abbey and is a beautiful, very walkable city.

The left column is the times when they will answer the phone; the right column lists the beer distribution dates.

The Cafe across from the Abbey calendar: