A crazy day at Disneyland Paris 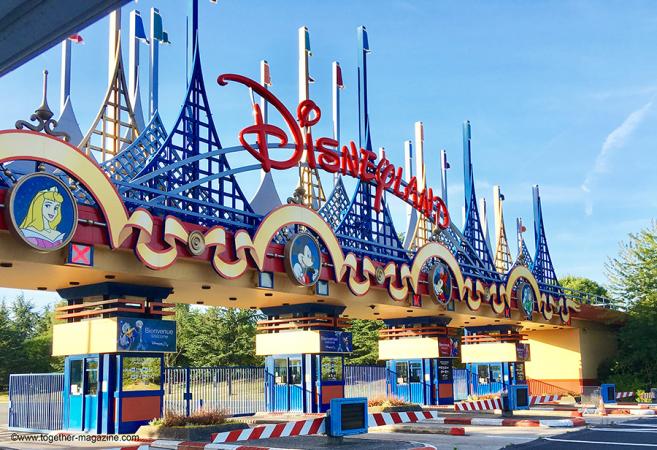 You may call us crazy, but last month we decided to take our kids to Disneyland in Paris. I do have to add, our kids are 19 and 15, but they had been bugging to going back to Disney for years now. So what do good parents do? You eventually give in, sit down and order tickets….

After browsing the hotels and other overnight options, we came across the possibility of staying there with our motor home! Yes! Considering that the hotel rooms have reached insane prices during the summer month.

Disney is offering the possibility to park your motor home directly at the park, right by a public bathroom and shower building. The overnight fee is only 35 Euro per night, you just have to be at the parking lot before it closes. To save some money, we opted on packing stuff for sandwiches, snacks and lots of drinks. Everyone was going to be carrying their own backpack and we stocked up on must haves like sun screen and hats. We packed up Friday afternoon and headed out.

The drive on the Autobahn was good, and once we got into France roads were pretty clear. Since we tried to get there before the park and the parking lots closed, we opted on taking the highways/toll roads. Driving though the booths wasn't hard but we paid a chunk in toll fees; all together just about 70 euros for one way. 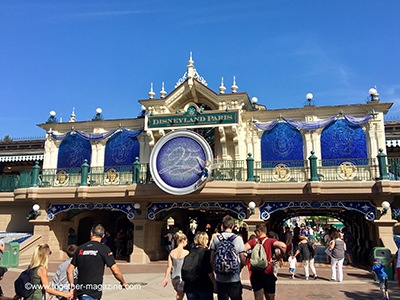 We reached the parking lot about 8pm, received our parking ticket, paid and found us a spot to park. Before we settled for dinner, the kids thought it be a great idea to head out for a walk and check out the Disney village. So off we went.

There is a nice walkway with escalators (that I truly learned to appreciate the next day) that takes you straight to the park. Before we entered the village we all had to go through security, a walk through a detector and a quick X-ray of any bags and purses and off we went.

Did I mention how old my kids are? Just in case you forgot…my oldest is almost 19… and here they both were stunned with big eyes standing at the entrance to a huge Disney store. They instantly turned into little princess girls running through the aisles of the store, holding and cuddling with huge stitch stuffed animals, having imaginary battles with lightsabers and just marveling at all the sparkling and shiny Disney souvenirs.

After a stroll through the village, the obligatory park entrance pictures and some first souvenir shopping, we returned to our mobile home, ate and turned in for the night.

The park opened at 10 am on Saturday; we packed our bags, lathered up with sunscreen and headed out. I was happy that we brought our own drinks since a half litter bottle of soda runs you 3.50 Euro! We had our tickets printed at home and went right through security, the lines at the park entrance itself weren't bad at all either.

In hindsight we should have paid better attention to what attractions we really wanted to see. The park consists of 2 parks, the Disneyland Park and the Walt Disney Studios Park. Both of them have rides, attractions and characters to meet, but you can only enter one of the parks per ticket. We chose the Disneyland Park and right behind the entrance the lines to meet your Disney characters started. If you are looking to meet a certain one, most places have times and pictures posted so you can plan a bit. They don’t mind you taking your own photographs, but selfie sticks are not permitted. Once it’s your turn you get to hug and greet your favorite character, get their autographs and take pictures. They also have photographers, and they will give you a photo-card to buy pictures later. 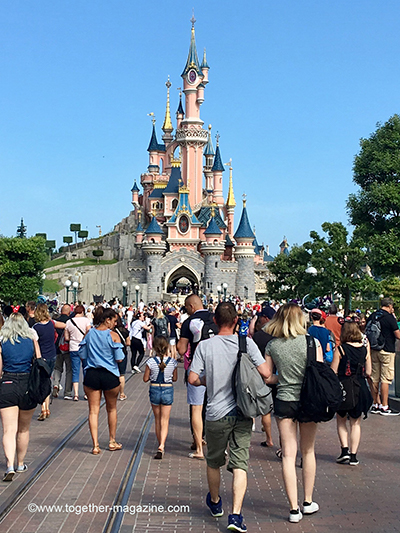 Once in the park, you really want to plan out your rides. Most of the rides offer fast pass machines, where you can scan in your entrance ticket. You receive your fast passes with times on it, when you can ride your ride without having to wait on line.

As the park filled quickly, lines got insanely long in no time, with waiting times of an hour and more.

The park is really laid out beautifully, with its old Main Street, the Sleeping Beauty Castle looming in the background and lots and lots of stores and restaurants. Your best bet is to set yourself a tight budget, because Disney really appeals to anyone…from the Star Wars and Marvel fan to the princess girls, hold on tight to your wallet. The walkways are really clean with lots of crew walking around picking up.

We did grab a program and map to make sure to catch all the shows we could, but the Star Wars walk was going on in the Studios, so that was a bit of a bummer.

The girls really loved walking through the pink dream castle and we watched one of the anniversary shows going on right behind it. Then we headed off to the Discovery Land. My husband had to ride all the themed rides, being the big fan he is. Waiting in the lines is not too bad since you have so much to look at, and they entertain you with video clips and more.

After a lunch break and a little rest, we went on to Frontier Land and then Adventure Land. Sadly the “It’s a Small World” ride and the “Pirates of the Caribbean” ride were closed for construction, but between the Train tour, the old Mississippi steam boat and all the other rides, there is plenty to do. The nice part, if you have small kid, is that you have playgrounds and kids areas everywhere. After coming back to Fantasy Land and a ride in the teacups, we ended up waiting in line to meet Mikey Mouse.

There are also plenty of restaurants that offer everything from fancy cuisine to pizza and burgers. Ice cream, popcorn and drink carts are available all over the park, too. All that and the souvenir shops everywhere.

Since we did not want to miss out on the parade, we headed back to Main Street. I do have to mention, people were starting to sit and wait an hour and a half before the parade started! We found us a nice spot and sat down. The waiting was a lot more bearable after we found some ice cream.

The amount of people flocking to see the parade was insane; it started getting really crowded and if you are a strong believer of personal space, this will not be for you.

The parade was awesome; the floats were beautiful and really made the Disney label proud. They had a huge magic dragon, dancing princesses, all the traditional guys that we all grew up with, like Pooh Bear, Captain Hook, Peter Pan and many more.

After the parade we headed off for some dinner and then back to the rides.

Since the park has their 25th anniversary going on this year, they run a special firework show in the evening about 11 pm. The crowds started gathering at 7 to be able to get a close spot for the firework display that is fired of at the Disney Castle. That did clear the waiting lines out a lot though, and that was nice.

After waiting almost an hour in the last Star Wars ride, we got out just in time to watch the breathtaking fireworks. The castle was illuminated in all colors, and they played clips of all-time favorite movies and beloved characters on the castle. The color matched rockets and sparklers that where shot into the dark night sky along with the lit waterspouts and fountains that followed the tune of the music were magical. The show lasted about half an hour and really finished off an exhausting and fun day.

The worst part was the crowd that all tried to leave the park at the same time, so we opted to check out the stores a bit while everyone was heading for the exit. Thankfully, the stores stayed open late.

By the time we made it out of the park it was 15 minutes after midnight. Let me tell you, all of us were beat, and we were really happy to let those nice escalators take us to our motor home where we all fell into bed. 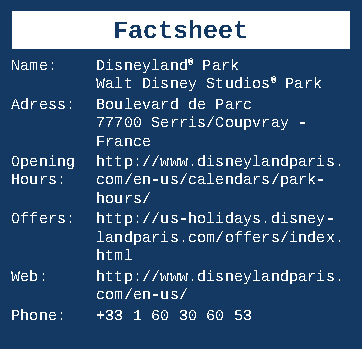 Once we were all up in the morning, we headed back to the village. The Disney village can be entered without tickets or paying an entry fee. They have several restaurants there, like McDonalds and Planet Hollywood, several Disney stores and run entertainment shows in the evenings.

After some last minute souvenir hunting and a nice breakfast, we headed back to the mobile home.

Then it was time to say goodbye to the Disney Magic Kingdom, and we all settled in to our seats and started heading out. To our surprise the streets and highways were not crowded at all, and there was next to no wait at the toll booths. Another 70 euros and several breaks later, we finally entered Germany again.

We had a great weekend, but there is nothing better than being back home.