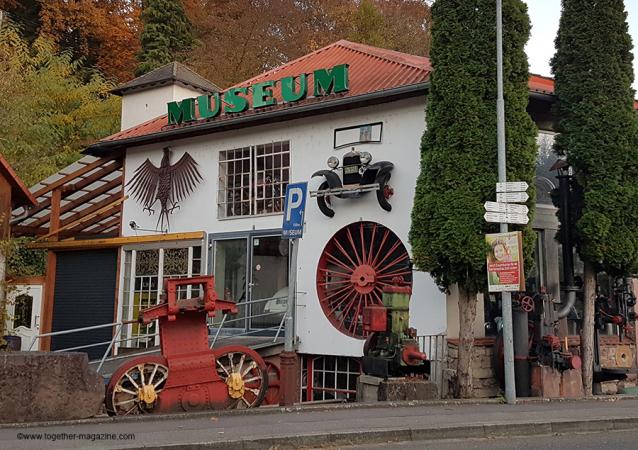 The Marxzell Car Museum is an hour drive from Stuttgart or 1.5 hours from Kaiserslautern. Coming from Stuttgart, take the exit Karlsbad on the A8 to Karlsruhe. At the exit turn left, and then you're only 20 minutes away from the museum. From Kaiserslautern go via Neustadt to Karlsruhe, then through Ettlingen to Marxzell. This car museum is entirely unique to Germany. It has been owned by the Reichert family for the last 50 years, and through various additions and conversions, there is now over 40,000 square feet of exhibition space. When coming to the museum, you'll notice that the first of the exhibits are already visible from the outside. 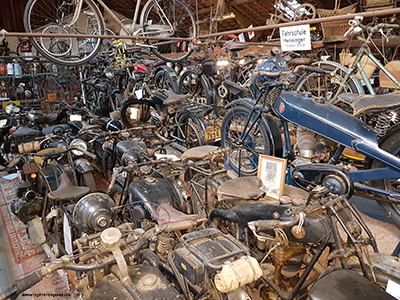 On the roof of the garage parking lot you'll find a MIG 15 - a Russian hunting aircraft from the 1950's.  You'll also notice five different locomotives standing outside, growing a little bit rusty, and you'll pass by an old armored tank before you reach the museum's entrance. The museum is open daily from 2pm until 7pm, and the entrance fee is 5€ per person. When you first enter the building you might be a little overwhelmed—to the left and right are staircases going up to an intermediate floor. On the left side, you'll see over 50 bicycles - on the other side motorcycles, tightly crowded together.

In the first hall you'll find, well, cars, including but not limited to a fantastic Rolls Royce that was built in 1936 – the cars very first owner? None other than Queen Mary of England. To the left are German cars, a few Mercedes and some old BMW's. Once again, a few rarities: - a Mercedes Woody from the 1950's¸ a Mercedes built with a rear engine, and other interesting vehicles. Motorcycles are hanging from the ceiling, and the walls are full of other things: a baby stroller, an old dollhouse, oil cans – you'll find a little vintage on everything here. To the right, passing by vintage Ford Model Ts and German vehicles from the 1950's and 60's, you'll find two large showcases with old telephones in them.

If you go down a bit further, you'll eventually find the 50-foot-long corridor where over 20 vintage fire trucks are displayed.  You'll also find this portion of the museum is dominated by a large fire-brigade helicopter, parked there without its rotor blades. Once you see it, you'll wonder the same question I did, "How did they get that in here?”

Continuing past vintage American cars, you'll finally find yourself at the back of the hall where the entrance to the gallery is. On the stairs are vintage Harley Davidson and Indian motorcycles; the gallery circles its way around the entire hall. Up top you'll find at least 60 different cars – particularly interesting is the comprehensive collection of approximately 20 “small cars” from the 1950's—and as I mentioned before, the walks are just chalk full of interesting paraphernalia. But, don't forget to look up every now and again, a glider hangs from the ceiling, and with everything else to feast your eyes upon, it’s almost overlooked. 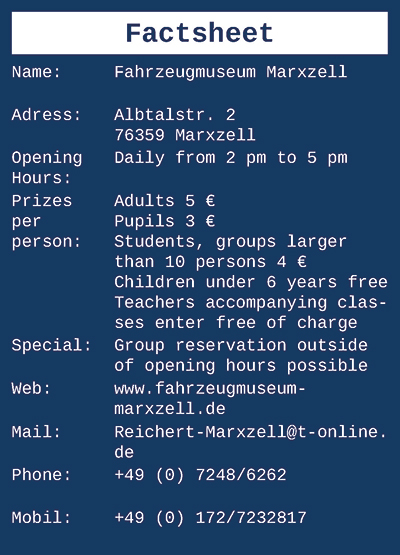 Once you've finished walking through the ground floor and upper halls, well, you might start to head back the way you came, but the owner might stop you to ask “were you already in the basement?”  The stairs to the basement are easily missed, but once you're there you'll find a unique collection of cars from France exhibited there. This museum is indescribable, really, there is so much to see and learn. You probably won't be able to take it all in just in one visit, but you won't want to miss it. You'll also come across a forge from the early 20th century, tractors, and finally the cinema. That's right, a movie theater inside the museum - but not just any movie theater. In a large room there are old movie theater chairs and various old films are shown. You simply have to experience this museum for yourself - most visitors come again and again! You certainly will too.