Halloween in Germany and its Roots

Halloween is one of the oldest celebrations in human history, the roots of which are buried deep in the traditional Gaelic Festival of Samhain. Originally Halloween was more of a Fall Harvest celebration, as the year of the Celts ended on October 31st . The summer was over, and the harvest was brought in, and this alone was a reason to celebrate. 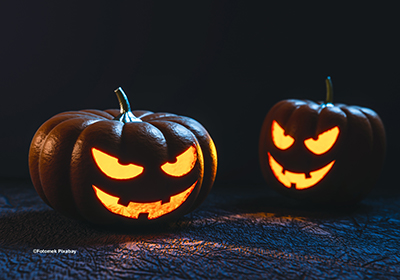 However, as the days grew shorter and colder, the Celts also believed that on the last day of their year the boundaries between the land of the living and the land of the dead would become blurry allowing spirits to cross over, and so they celebrated Samhain. This festival was an all day occurrence where offerings were made to the spirits of the dead to keep them from taking over people’s bodies, and people lit huge bonfires and dressed up with masks and in animal furs to keep evil spirits at bay. Druids were also known to seek counsel from the dead and told predictions of the future at this time. At the end of the celebration people lit the fires in their homes with the flames of the bonfires that burned throughout the night as a symbol of protection. A tradition called “Mumming” was also a part of the Samhain festival from at least the 16th century onward and involved people dressing as the spirits of the dead and going from house to house, singing songs or reciting verses in exchange for food.
It is also important to remember the role the Christian church played when looking at the creation of the holiday as we know it today. So lets go back to the year 800 A.D. where the Catholic church tried to replace the Pagan celebration of Samhain with a Christian celebration of its own. It was here when Pope Bonifaz IV founded All Hallows Day. By the year 1000 A.D. this celebration had grown into a three day event that was known as Alhallowmas and the evening of October 31st became forever immortalized as as All Hallows Eve. Later, immigrants from Ireland and Great Britain would bring the Halloween tradition with them to the New World. Here, their celebrations slowly began to merge with that of the Native harvest celebrations and Halloween slowly made its way across the North American continent.
Dressing up in costume has always been a big part of Halloween, as these costumes were supposed to protect the people from the evil spirits that would otherwise possess them. Some say that “Trick or Treating”, originates in England where the poor were given so called “soul cakes” in exchange for prayers for the dead. In Germany, an old book entitled 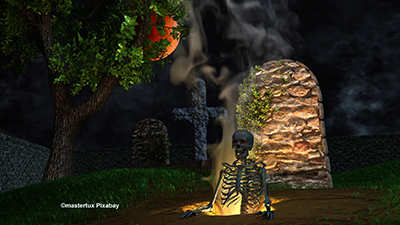 “Handwoerterbuch des Deutschen Aberglaubens” talks about how German kids would walk through the neighborhood begging for little gifts, like apples, flour, wheat, lard and coins for the poor lost souls of the dead. Even the “American” Tradition of lighting a Jack O‘ Lantern has its roots in European traditions. In Germany for example, in the southern regions of Saarland and Thuringia, they would carve and light beets as a part of an ancient tradition. Here they are lovingly called “beet ghosts” and much like the Jack O‘ Lantern they are displayed on porches and stairs. The book “Handwoerterbuch des Deutschen Aberglaubens”, holds many other interesting facts as well, for example it contains reports about the hauntings that might occur around All Hollows Eve... such as little lights floating around the graves on cemeteries or spirits haunting the visitors of the church that day...Despite the fact that the church had a large part to play in molding Halloween into what it is today, for a long time they still seemed to hold a complicated relationship with Halloween, often calling it pagan or occult...but that is (mostly) in the past.
Today’s Halloween bears little resemblance with the festivals of old as most of us no longer feel the need to celebrate the harvest; and while some Pagan religions might still use this day to honor the spirits of the dead, most of us just use it as an excuse to party, and to take the kids out for treats.
Popular costumes these days are based off of superheroes and the newest hit movie, and even in Germany kids take to the streets to try their luck trick or treating. While the collecting of sweets is not nearly as big here in Germany as it is back in the states, the amount of parties and festivals we have nearly makes up for it. Germans love to party and there is no better excuse to party than another holiday. Frankenstein Castle, for example, has established itself on the Halloween Event List along with most German amusement parks. Huge Halloween parties and events are popping up all over and are a great success with Halloween fans everywhere.
But lets not forget that pumpkins are one of the “must haves” for most of us celebrating Halloween and most of the various stores, parks and farms here in Germany are more than happy to fulfill that need. Pumpkin fields offer you the chance to “pick 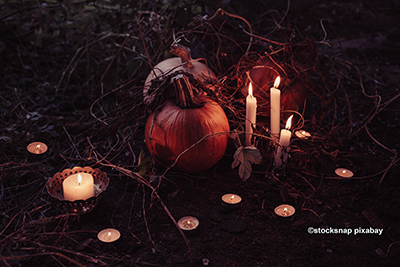 your own pumpkin” and public garden and parks often display unique pumpkin exhibitions. One of the largest in Germany is the Ludwigsburg Pumpkin Festival. This festival is located at the Baroque in Bloom in Ludwigsburg. This year’s festival is set to last from September 1st until November 5th and this years theme is “Rome”.
The already stunning gardens will be decorated with pumpkins everywhere and artists set up large displays built entirely out of pumpkins. The festival also has quite a few events going on that  involve pumpkins in one way or another. Here you‘ll find everything from pumpkin carving, pumpkin racing, pumpkin weighing competitions, to live music and a variety of festival foods—there is definitely no shortage of things to see or explore. There are plenty of kids activities as well, including a Halloween pumpkin carving tent, storytelling areas, or exploring the legendary straw castle. The best part of it all may be the yummy festival food that is waiting to be sampled and devoured by hungry participants. Between October 28th and November 1st the park also features a haunted tent.
If you chose to go during the week, bring your camera, there are plenty of possibilities for some great fall pictures. The park does allow entry to dogs and you can also bring your own picnic. You do want to make sure you come early enough though, since the displays are not illuminated once it gets dark.
We wish you a magical Halloween!
written by Karin Stumph