The mild weather is inviting the meerkat triplets outside to play 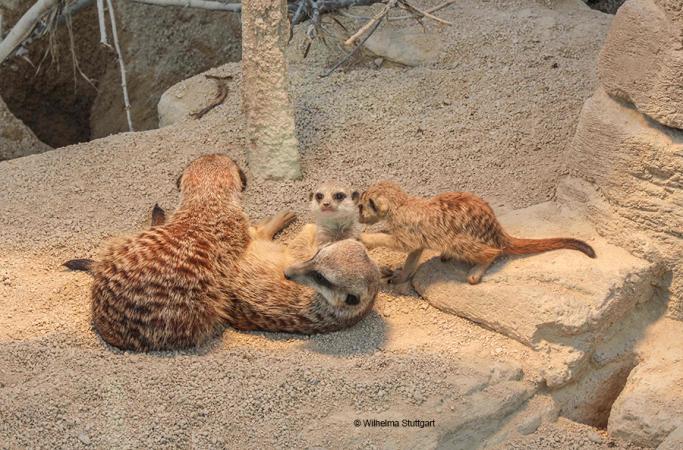 After the freezing temperatures, mild weather is finally on the radar and with that comes not only the bloom of the snowdrops.  We finally get to see the 3 new additions of the meerkats; peeking out of their holes at the Wilhelma. The triplets were born January 27th.

Completely naked and blind at first, the newborns of the South African mongoose spend the first weeks of their life underground, in the heated indoor enclosure, at cozy 20 degrees Celsius. So, even during the end of February chill, the pups were snuggling with their family in warm tunnels. Now the visitors of the Stuttgart botanic gardens and zoo can observe the perfect 5-week-old miniature versions of the big meerkats exploring the outdoor Savanna compound. 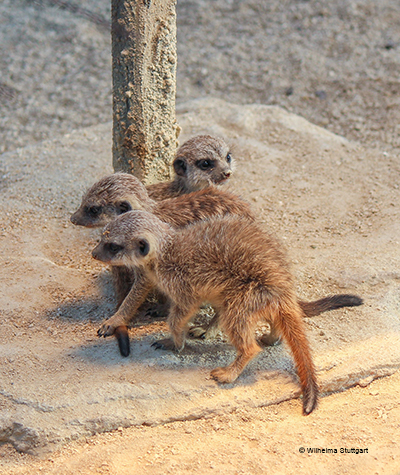 There is plenty of running, playing, digging and scratching. That keeps them warm. Heating lamps do their part to prevent the little guys from cooling out during nap times. The siblings can get quite daring, exploring their 120 square meter large territory made from sand, rocks and wood, in groups of two, three or even all by themselves. But they are watched with eagle eyes, by their clan members. Standing up straight they spy, to ensure there are no predators coming from the air above them. The biggest danger in their native home are birds of prey. Here in our area the tiny guards also have to keep an eye out for the crows, that can post a real threat to the little ones. Attacking together, they can chase off the feathered threat. Twelve meerkats make up the clan in our enclosure. The breeding pair ended up being a male from the zoo in Cologne and a female from the Wittenberg animal park. They make for a harmonic couple and so far, produced eight litters since 2015.

Meerkats live in large family clans. Even once grown up, the juveniles normally stay within the group. Chemical messages transmitted by the dominant female and the lead male, prevent fertility in the rest of the clan. The members do help with raising the young. They keep them warm, guard them and even go out to look for food. The Aunties also step in as wet-nurses and help nursing the little ones. This strong family bond gives the pups a much better chance of survival, which in turn benefits the survival of the clan. In the wild, clan sizes can reach up to 20 to 30 animals. But after a certain number is reached, the clan starts pushing animals from the group. Once those animals are leaving the group and move away, they become fertile again and are able to found their own clan.

The caretakers and curators in zoos have to watch out for social changes in the meerkat communities. Once the pushing away process starts they remove the affected animals and adopt them out to other zoos or animal parks.