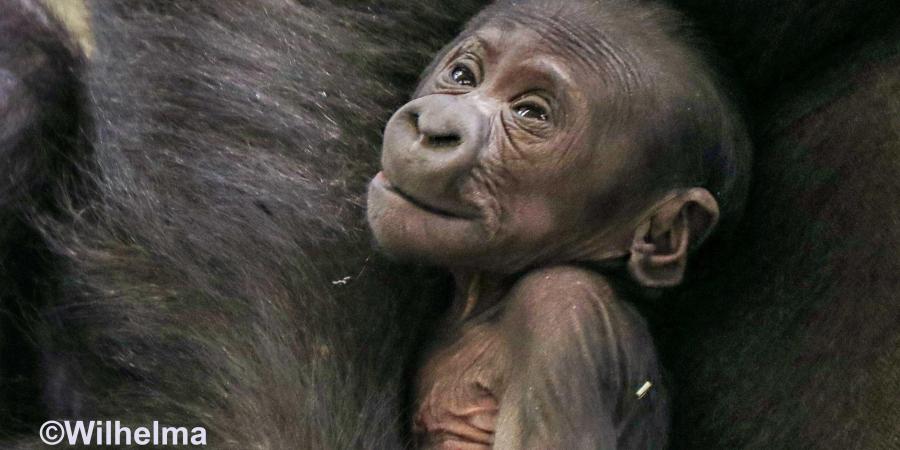 Almost 3 years after the last birth in the Gorilla group, this year’s addition brings their number to 12. On January 11th, 2018 animal caretakers where thrilled to discover the, so far unknown gender, gorilla infant. 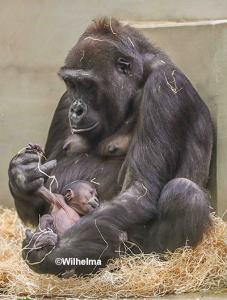 Gorilla Tuana is, with her 13 years of age, the youngest female in silverbacks Kibos troop. This is Tuanas second baby, she is originally joined out gorilla troop in 2013, from the zoo in Hannover and easily distinguishable by her beautiful brown coat, versus the other black gorillas.
It was also Tuana who had the first baby in the newly build Great Ape – house. Her son Tonda was followed by Kajari (son of Koto) in 2015 and Masani (son of Mutasi) also in 2015. All 3 of them are very interested in the new baby, but before jealousy gets the best of Tonda, his half brothers are bugging him to play with them. Additionally, to the little ones there are the six year old Milele and the 9 year old Kimbali. Kimbali will be leaving the troop within the year though, he has reached the trouble maker stage and keeps picking fights over food. Something the senior Mimi, with her 55 years, does not need.
Tuana’s infant is the 36th’s gorilla born in captivity here at the Wilhelma zoo. The gorilla moms have been accepting their babies without any problems for years now and they integrated well into the troop. It is great that the family is so harmonic and we do not need to use the kindergarten next door, especially since there is no need for it from other zoos either. The growing international knowledge of how to raise and breed gorillas and the constant exchange of information has gone a great length in the preservation of the gorilla population in the zoos. An immensely important task since the gorillas are still threatened from extinction in their natural habitat.