This past July the USO Stuttgart held its 25th annual Golf Tournament at Golf Club Hammetweil (4 Stars) in Neckartenzlingen. This tournament is not only meant to provide a little bit of recreation and entertainment for service members and their families—it helps to strengthen the bond between the German and American communities. Germans are encouraged to come out and play alongside their American friends. A lot of people came together to make the tournament work; American and German Volunteers, the USO, German companies, and even United Airlines. 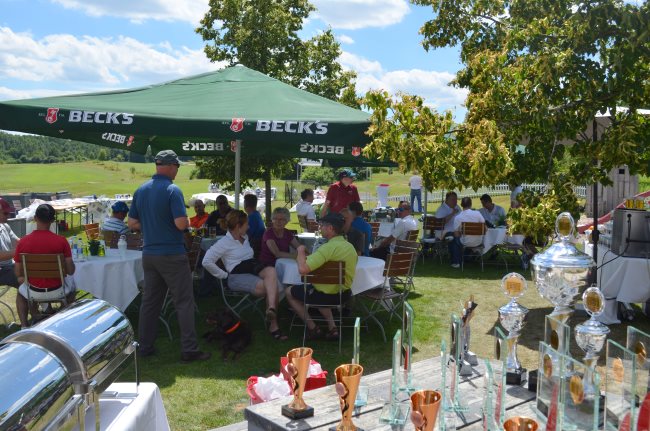 An amazing lunch was served by Golf Club Hammetweil, and live entertainment was provided by TOGETHER Magazine. We brought in U.S. musician Mark Ritter to play some fancy tunes with his guitar, and everyone seemed to have a great time. Even the lovely ladies of the USO stepped “on stage” a few times to play the maracas or the tambourine.

I had the chance to speak to a couple of the guys at the tournament who were playing as a team, Stacey, Jaimie, Dean and Adam (who then happened to go on to win 2nd place). Stacey is stationed in Stuttgart, and he says you can almost see his house from the Golf course; it‘s just a few villages over. This is his fourth year participating—“I like it, I like that it‘s outside of your typical golf course like on base. Part of what makes it so great is its out on the economy. It‘s a part of the German community.” 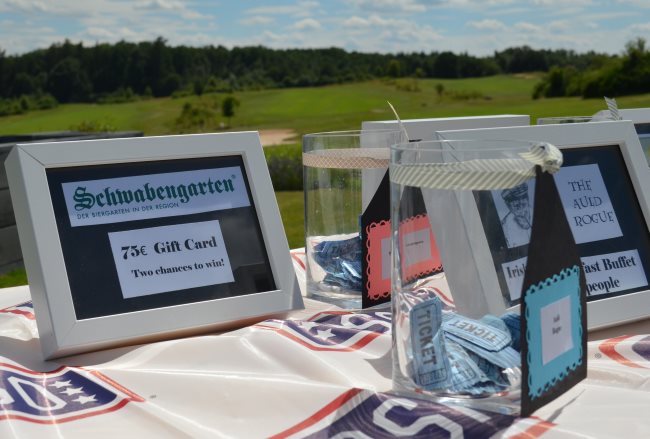 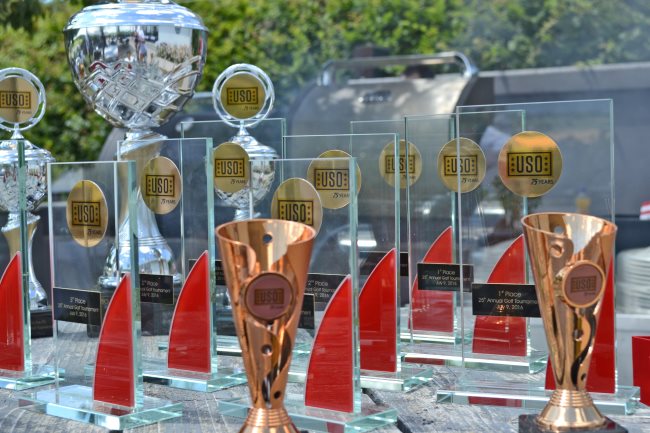 Jamie, who is also stationed in Stuttgart, has taken part in the tournament every year since 2010. “I love it.” He‘s been playing golf off and on for the last 15 years, though he says “I wouldn‘t call it playing—I participate.” Jamie won the “Longest Drive” award at the tournament. Dean works on Stuttgart‘s Airfield. He‘s been at the golf tournament for a total of three years. “I enjoy it every time, it‘s nice to get out of the city.” They all seemed to be in agreement that it was one of the best golf tournaments around—“Being in the military for over 20 years, it‘s one of the best in regards to the course, the people, and the food. It‘s different, not just a typical on base MWR tournament. The staff (at Golf Club Hammetweil) is amazing.” I didn‘t get a chance to talk to Adam one-on-one, but he seemed to be in agreement with the rest of the guys. One tip I picked up through conversation: don‘t forget your sunscreen!

Golf Club Hammetweil is also pet friendly! Water was provided for the pups, and the restaurant offers lovely views of the countryside. The USO (and all of the fantastic volunteers) did a great job putting this event together. I‘d like to especially thank Nora and Tiffany (The USO Stuttgart‘s Center Director and Program Coordinator), and, of course, thanks to Stacey, Jaimie, Dean and Adam for allowing me to “bug” them for information.