The Stuttgart TV Tower started its service in 1956, it was the first of its kind and it has since been an example for other towers which were built worldwide. During its construction period, the project Stuttgart TV Tower was controversial
amongst the citizens of Stuttgart. Meanwhile, the 217 meter (711 ft.) high tower, which is considered as an architectural masterpiece, is the landmark of Stuttgart.

In March 2013, the tower was closed to the public due to a review of fire safety regulations. Almost three years later, on 30th January 2016, the tower was reopened with a refurbished entrance, shop area and new, optimized fire safety
precautions. After being "dark" for all these years, you can now see the illuminated tower in the evenings again. After getting your tickets in the refurbished entrance area (7 EUR for adults, free for children up to 5 years, 4 EURfor children from 6 to 15 years), the lift takes you to the first viewing platform on 150 meters (492 ft.) within 30 seconds.

The Stuttgart stadium Mercedes Benz Arena The tower basket consists of four floors. The lowest floor is on 138 meters. Until 1974, the transmitter for Stuttgart TV was built in there. Nowadays, it is used for the tower´s building services, several installations for mobile phones and transmitters for the police. The upper floors are used for events and there is a café in one of them, too. On top of the café, there are two viewing platforms, the first one is on 150 meters,
the second one is three meters higher and was built especially for children because the railing of the first one is too high. From the café and the viewing platforms, you have an exceptionally spectacular view over Stuttgart and its surrounding areas. If the weather is good, you have a view of about 120 kilometers (75 miles). Come visit the Stuttgart TV Tower to enjoy this amazing view during the day, as well as at nights. 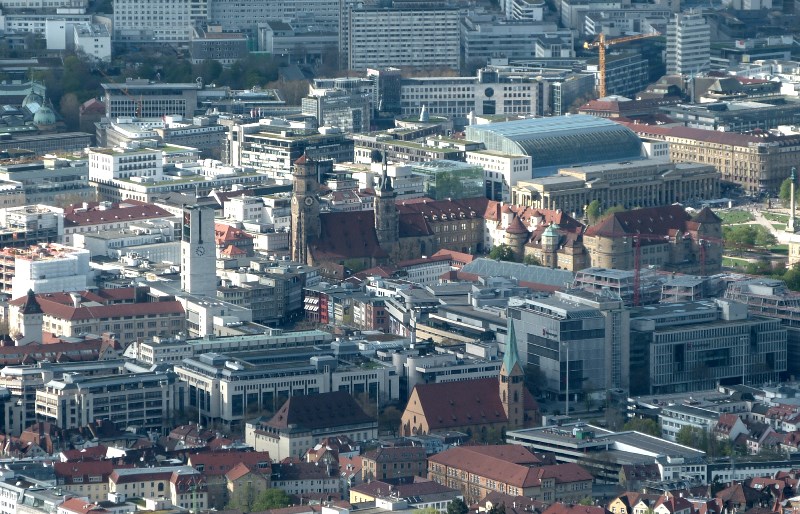