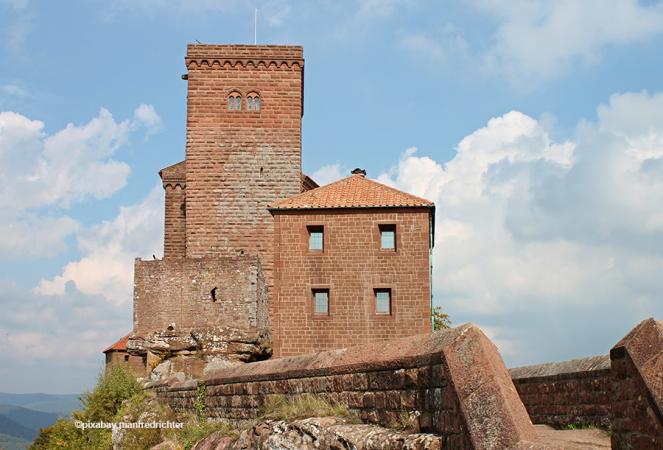 The picturesque village of Annweiler in the state Rheinland Palatine is home to a stunning reconstructed castle, Trifels.  The castle is sitting at an elevation of 500 meters (1600ft), on the peak of the typical sandstone mountain, Sonnenberg. The Sonnenberg mountain has 2 lower peaks, both home to castle ruins, the Anebos castle and the Scharfenberg castle. Castle Trifels was the favorite of emperor Barbarossa. 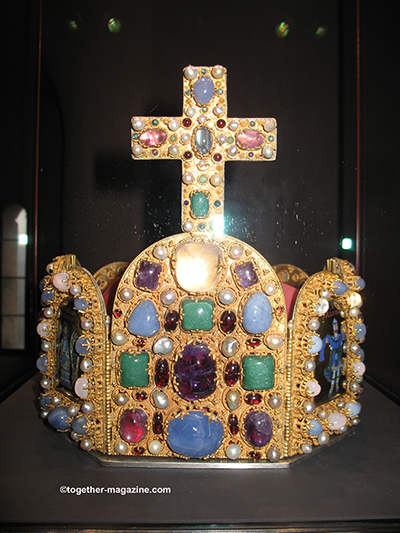 The castle was first mentioned in 1081, and in 1113 Trifels was converted into an imperial castle under Emperor Henry the 5th. After his passing the castle was used to hold the imperial regalia for safe keeping, for over 100 years. After 1300 the castle was handed over between rulers until after the 30-year war, when it started decaying. While Earl Georg the first supposedly invested a large amount of money into the castle around 1320 and again in 1338, that did not change the fact that the castle had lost the importance it once held. Trifels was used as collateral during the rule of the Dukes of the Palatines and by 1486 emperor Friedrich the third pardoned the dept and the Castle was officially back in Platine – Zweibruecker hands. The next centuries were rather quiet around the castle, the farmers war of 1525 did nothing to the castle, while it was occupied, it was not raided or damaged. An inventory done in 1595 still mentions usable rooms, a chapel and knights sleeping quarters amongst other things. In 1602 Trifels was hit by lightning and burned partially down.  In 1635 Trifels was finally abandoned and left to decay, the decay was sped up by the removal of stone and columns to be used in other construction projects.

In 1840 the Bavarian kings of Wittelsbach started reconstruction of the former imperial castle. Ludwig the 1st had the plans drawn by his court architect August von Voit. The reconstruction spanned over the rule of the German emperor, the third Reich all the way into the late 1970s. 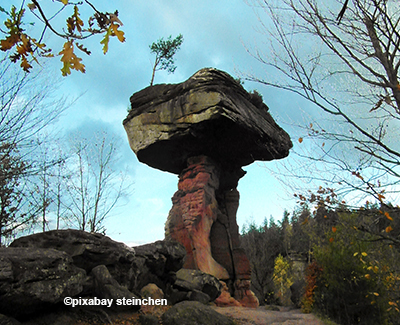 Today’s castle does not represent the original medieval castle but fits quite well into the rocky mountain tops of the area.

The story the castle is most famous for is the imprisonment of King Richard the first, better known as King Richard the Lionheart. The English king was on the way home from his third crusade when he was imprisoned after he was captured by Duke Leopold V of Austria near Vienna in December 1192.  He was kept there until he was finally released for a hefty ransom, the story talks about a sum between 100,000 and 150,000 Marks, a huge sum for the times.

Today the castle houses a collection of replicas of the imperial crown jewels and regalia. The hike up to the castle takes you around the outside of Trifels and leads you right to the memorial column and the large arch of the entrance. After entering the court yard and paying your entrance fee you can enter the castle and visit the museum and the other rooms. The reconstructed knight’s hall with the great iron chandeliers and the grand staircase looks to be right out of a Robin Hood movie. Tiny steps and hallways lead you though the old castle. The large tower is accessible and the view from the top is breathtaking. Especially during the wintermonths when there are no leaves on the trees, the other ruins are clearly visible.

Trifels makes a wonderful destination for a daytrip from Kaiserslautern and even Stuttgart. Not only is the castle well worth a visit, the quaint medieval town of Annweiler is enchanting and another must see is the Teufelstisch, the devils table. The drive to Trifels takes you right though the national park Pfaelzer Wald, one of the biggest forests in Europe. The Teufels Tisch (Devils table) is only a 20 km drive heading west from Castle Trifels, and a great area for hikers and for lunch breaks there are plenty establishments available to replenish.