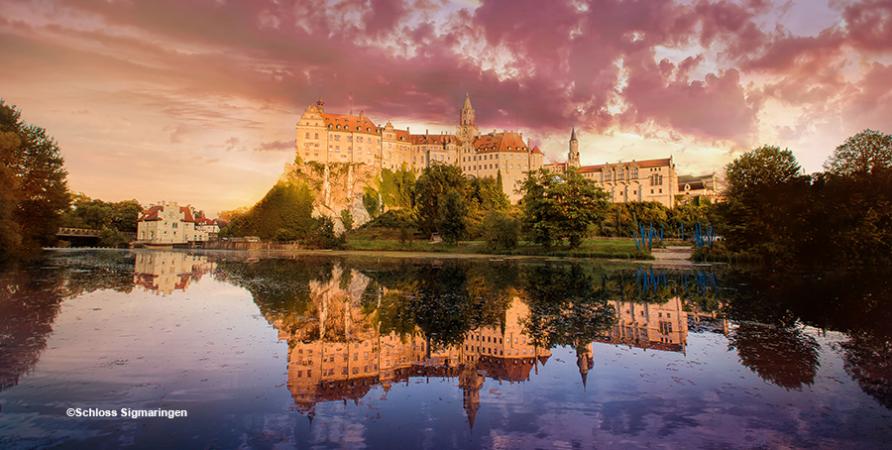 “Visitors are amazed when I say that Sigmaringen is Germany’s most important castle,” the guide says with a smile. “But this castle belonged to, and still belongs to, the Hohenzollern dynasty that played a vital role in German history.” Towering on a steep limes­tone cliff, high above the Danube River, the family’s ancestral seat is 90 minutes south of Stuttgart and only an hour from Lake Constance in the German federal state of Baden-Württemberg. And it provides a fascinating stop when touring southern Germany.

The 12th-century tower is a reminder that this was a fortress 800 years ago. But the current castle is a mere 125 years old. Rebuilt after a fire, the exterior retains a Rapunzel fairy tale look, with elegant spires and forbidding walls. Inside, many of the original foundations and cornerstones still exist. The 420 rooms are filled with handsome, original furniture; there are miles of corridors and thousands of stone steps. The overall effect is truly awe inspiring.

“Back in the 19th century, Germany was still a collection of kingdoms, principalities and duchies,” the guide explains. “It was this branch of the Hohenzollerns that created the nation we know as Germany back in 1870.” It may be hard to believe that this was at the heart of Europe’s power broking, but on one of the themed tours, you soon realize that Sigmaringen was all about impressing VIPs. From the main gate, footmen accompanied dignitaries to the Cannon Hall, with its armor, hunting trophies and, of course, cannon. 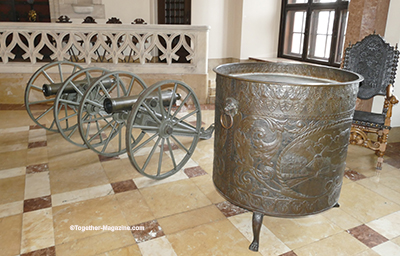 Thanks to the guides, you learn about much more than the visual pomp. You hear about diplomats and powerbrokers, men and women, who shaped Europe’s history. On top of it, it is also fun. On some tours you can dress up; on others, you receive a title or military rank, so “aristocratic ladies” might walk through the castle on the arm of a “cavalry captain”.

Over the centuries, rooms often changed roles. Kitchens were converted into living areas; designers decorated salons. Now fading to yellow, the Green Salon, reflects the late 19th-century fashion for the French look; the Blue Salon was for the princesses; gentlemen played cards in the Black Salon. Where the Portuguese Gallery is now, with its Renaissance tapestries, was once an open courtyard. In 1893, the wedding of the year was celebrated in a marquee: the marriage between the future King of Romania and Princess Marie of Edinburgh, Queen Victoria’s grand-daughter.

Perhaps surprisingly, Germany’s second largest castle has long been a visitor attraction. Back in 1877, Wilhelm Essrich, a footman, would provide guided tours of the magnificent halls for a fee of 40 pfennig (40 Pennies). The price may have risen, but today’s tours are still personal, led by one of the castle’s 50 highly-trained, multi-lingual guides.

Afterwards, have coffee and cake in the café. Take home cigar-shaped pralines (Prince Karl Anton adored cigars) and Lebkuchen (Princess Marie rated the castle’s gingerbread as the best ever). All are freshly-baked by the royal confectioner.

TIP: On the four Sundays in Advent, see how the Hohenzollerns spent the Yuletide; find out why Christmas trees were hung on the walls, but hung upside down!

From swords and pikes to breastplates and helmets, the arms and armor of the past provide a link to the life and times of long ago. And nowhere more so than in the Armory of Sigmaringen Castle. Step inside and you can see just what it took to be a knight in shining armor. As for the castle itself, this neo-Gothic seat of the Hohenzollern dynasty is a hidden treasure, half-way between Stuttgart and Lake Constance in the Southwest of Germany. For fans of romantic medieval novels and fantasy video games, it is a must.

Like them, Karl Anton, Prince of Hohenzollern (1811–1885) was fascinated by the world of knights, chivalry and jousting. Inspired by Romanticism, the cultural trend that was popular in Germany and across Europe, he began collecting ancient weaponry. It became a passion. He scoured the world for treasures, accumulating such a trove that he built a special armory.

Some 150 years later, that wood-paneled, vaulted hall is now home to 3,000 different artifacts. The atmosphere may be medieval but the technology is modern: an entertaining 45-minute audio guide connects to 17 information points that explain the hows, whys and development of weaponry and armor from the 14th to the 20th century. 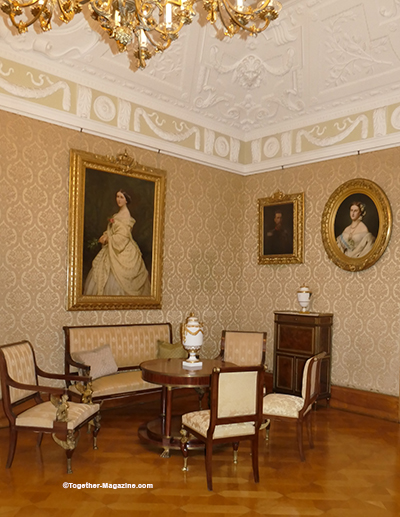 Start with armor. A full suit consists of 120 parts and weighs in at 50 pounds. One ceremonial version is elaborately-engraved with gold inlay; more practical is a black example, which had been protected from rust by heating the metal red-hot in a fire and then dipping it in linseed oil. But armor was also a status symbol. So, the elaborate helmets and extravagantly-long, pointed metal toes ordered up by the nobility were less about warfare and more about showing off their wealth.

Equally fascinating is seeing how weapons evolved over the centuries. Take the fearsome crossbow, whose iron bolts could penetrate armor from a distance of 250 feet. This was the first mechanical long-range weapon and it was more effective than firearms until the end of the 15th century. At closer range, massive two-handed swords wrought havoc in 15-17th-century battles. Some five feet long and about seven pounds in weight, they were wielded by farm boys, who were attracted by high wages to fight as mercenaries.

What fascinates visitors and historians alike is the scope of the collection. As well as arms and armor for soldiers, there are displays about horses and musicians. Like another weapon, horses were trained to rear, jump and kick out. Then, there was the musical element of warfare. The walls display pipes and drums, instruments used to motivate soldiers in battle. Alongside them are long heraldic trumpets used to bellow out orders as loudly as possible. One treasured corner is reserved for the Hohenzollern family itself, with their personal helmets, sabers and equipment preserved from yesteryear. No wonder one excited youngster remarked recently: “It’s like being part of The Game of Thrones!”

When Americans take a sip of Miller High Life or Miller Lite, they are enjoying a direct connection with Sigmaringen Castle, thousands of miles away across the Atlantic. For 500 years, it has been the historic seat of the powerful Hohenzollern family. But it also boasts a connection to one Friedrich Müller, who changed his name and traveled to the USA, where he built a new life back in the 19th century.

Most visitors come to admire the antique furniture, the great artworks and the medieval armory. Then, there is the beer. In the old days, everyone brewed beer. It was drunk in humble homes and farms, as well as in royal residences. And Sigmaringen was no exception. Surrounded by fertile countryside, where barley, wheat and world-class hops were grown, its Royal Brewery had the finest ingredients for making beer just across the drawbridge.

On a tour, guides take you through Cannon Hall, point out the site of the old brewery and tell the tale of Friedrich Müller. In 1849, this 24-year-old bought the lease to brew beer under royal license, “By gracious permission of his highness“. He quickly built a reputation as a master brewer but was ambitious and wanted to try his luck in the USA. In those days, Germans needed permission from their feudal lord to leave the region. “And Karl Anton, Prince of Hohenzollern must have liked Müller”, guides explain, as they show the original document that gave permission for Müller to leave the Province of Hohenzollern.

In 1855, having changed his name to Frederick J. Miller, he left for the USA and founded the Fred Miller Brewing Co in Milwaukee. Determined to produce “confoundedly good beers“, he had taken with him some special brewer’s yeast from Sigmaringen. Astonishingly, a descendant of that precious yeast is still used in some Miller beers. 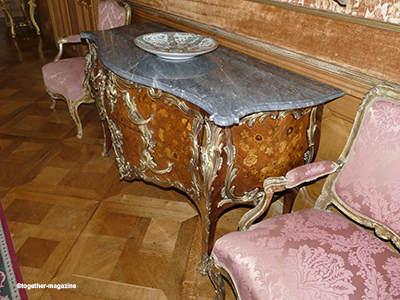 No visit to Sigmaringen Castle today is complete without a beer in the café, with its views over the surrounding countryside. And what better to order than an “Old Fred” amber lager. Produced by a nearby brewery, it pays tribute to the local man, who made his fortune in the USA. But this tipple also succeeded in America, winning the silver medal in the 2017 New York International Beer Competition. So, raise a glass to Friedrich Müller, aka Fred Miller, and also to the Prince, who gave him his start and then allowed him to leave and make a new life in the New World.

Back in 1955, the Miller Brewery made a movie, “The Beer Castle of Sigmaringen”, or “Alte Ansichten von Sigmaringen”, in German. A tale of two valleys, the Danube and the Menominee Valley in Wis­consin, it follows an American couple as they travel to Sigmaringen Castle to see for themselves the original brewery.