Bad Wimpfen and Burg Guttenberg are located in the beautiful Neckar Plain about an hour by car from Stuttgart or 1,5 hours from Kaiserslautern. Take the first exit on the highway A6 going towards Mannheim, the exit Neckarsulm and then head toward Mosbach. But beware – there are 4 stationary radar traps on this stretch of about  10 miles. Bad Wimpfen and the knights castle Burg Guttenberg were spared damage during World War II, so many old historical buildings are left intact. It is a wonderful, hidden sightseeing spot. Bad Wimpfen has been called the most beautiful riverside city in Germany. Bad Wimpfen’s most famous landmark is the blue tower. This tower is the defense tower of the castle built in the 12th century where the guards have lived for 650 years. The tower is a great place to get a magnificent view of the old town and Neckar Valley. 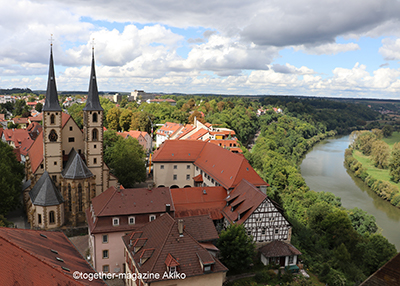 Historic finds confirmed that, located at the highest point of the city, a little church was built at that spot; long before the construction of the Staufic palatine area. This church was upgraded in 5 construction phases. It’s safe to assume that there was already a settlement around this church, when Emperor Friedrich I. Barbarossa was leaned with Wimpfen from the Bishop of Worms. In the year 1182 the Emperor of the Staufen clan, is officially mentioned in old documents, making it the widely agreed on founding date of the Wimpfen Emperor Palatine. The medieval empire did not have a capital, the kings moved from Palatine to Palatine, to show presence or rule on court cases. That turned Wimpfen repeatedly into a ruling city, where the royal court lived and played. To this day our imagination takes us back to medieval times, the knighthood, the minstrels and falcon hunting- but back then it was a huge financial strain on the city. By 1250 the city had become an imperial city and at the end of the 13th century the Dominican monastery was founded, which quickly became one of the biggest in Germany. Bad Wimpfen reached its peak of development by the 15th century. The 30-year war (1618-1648) marked the begin of the proud cities fall. One of the biggest battles of the war, in 1622, met the destruction of many of the ornate medieval structures. The rubble of the destroyed houses was reused to reconstruct houses in the city. After the war, there was only 37 families left in the city.

The most important building in the town is the court the Emperor Staufer built at the beginning of the 13th century. The court chapel was also part of the court. The stone house where the queen lived is also a historic landmark in the city.  You can enjoy the beautiful, old cityscape of Germany which is not a typical tourist stop. The city is also small enough where you see most of the sights in half a day.

Burg Guttenberg is about 10 minutes by car from Bad Wimpfen. The knight’s castle is built on the mountain overlooking the Neckar Valley. There is nothing that has been destroyed in WW 2 and it still remains as original. The same family has owned the castle for 17 generations, since 1449, and they continue to live on the premises. The late medieval castle Guttenberg is one of the last complete Staufer castles within Germany. One you enter the impressive castle courtyard, you can just imagine hearing the roar of the cannons, the metallic clank of sword fights and chains rattling. Bloodcurdling screams are coming from the torture chambers, a pale ghost floats across the halls into the spinning chamber, mumbling creepy rimes....
„Life in a knights keep“ is the name of the award winning exhibition of the castle museum, that offers plenty of answers to questions like: How did you become a knight? What weapons did knights use ? When were the castles built? And how did the people live in those long ago centuries? Visitors will be taken on a trip though the medieval times to the 19th century and get to meet decked out knights, war lords, passionate hunters or maybe even a castle ghost.
The castle is also housing the German ornithological station for birds of prey. 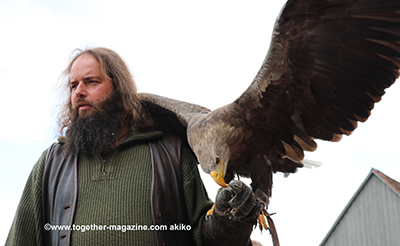 Experience Eagles, Vultures and Owls flying above the castle Guttenberg – no matter what weather! Most of the time you can watch these stunning birds, like Bald Eagles, Imperial Eagles, Golden  Eagles, Eurasian Black Vultures, Griffin Vultures, Bearded Vultures and their family with a wing span of over 2 meters, all in one show. They circle over the Neckar river, fly up high over the castle towers or dive down over the visitors heads.

The wide variety of birds of prey that get to fly over the castle is nearly unheard of in Germany. The specialized „ground personnel“  are happy to educate children and adult about their birds. The old kennels left from the Stauf family offer a natural look at the fascinating world of the birds of prey: There are about 80 birds living between artfully crafted statues. Interactive touch screens and a exhibition show the raptors in their typical homes. Life-size silhouettes on the castle tower walls give an impression of the size of these animals.

The team of bird handlers at the castle Guttenberg also cares for injured and sick animals. Besides the medical care by a trained vet, the birds are fed and trained, so they can be released as soon as possible. The birds fly overhead and you can hear the flapping sound of their soft wings. The views of the hawks and eagles in the sky, with their big wings spread as they ascend over the old castle. built on the mountains are beautiful. Every day in summer there are 2 air shows, even a show conducted in English (let them know you want to sit in the English show).

They also offer the possibility to book a private lesson in falconry. This enables you to meet a Harris hawk – up close on your gloved hand and even touch their soft feathers. Get to know the bird, and take him on a discovery tour. Your falconer and your Hawk (or other bird), will help you learn about these magnificent creatures, answer questions, learn about the protection laws and take pictures. The highlight of the lesson has to be the flight you get to take with your bird. The lesson for falconry will cost you 125 Euros and makes a great gift too. The German ornithological station for birds of prey finances itself only though donations and the entry fees.

You can even buy feathers as souvenirs at the ticket office. Each feather comes with a number, and a certificate because in Germany it is forbidden to possess eagle wing feathers without permission.
Bad Wimpfen and Burg Guttenberg have plenty of authentic medieval atmospheres.