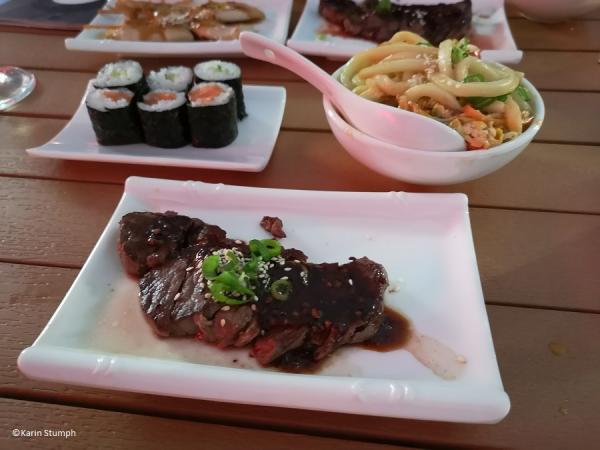 I am a huge sushi fan, so I did not hesitate when I was offered the chance to check out a new, local place.

Located inside the Schwabengalerie in Vaihingen, the restaurant is easily reachable by public transport, and there is lots of parking available. There are several large public parking garages right in the area. Mikomi sits right in the little courtyard, so you also have the option of dining outside.

We, the husband and I, arrived for our dinner reservation and were swiftly led to a cozy table under the large umbrellas outside. The restaurant was fairly busy, and people seemed to be enjoying themselves and the food. 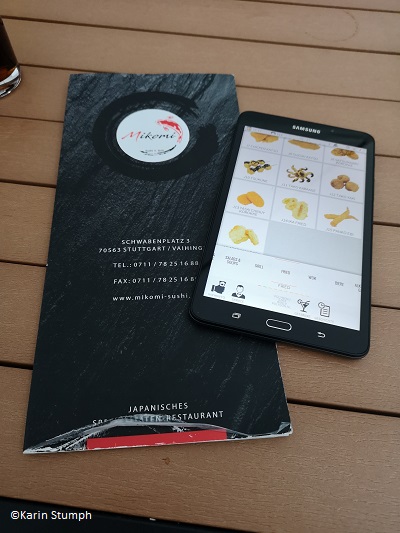 Soon after we had settled in, our waiter appeared at the table with a little tablet PC. This was a whole new experience for me; he explained how we can order ourselves with the tablet, and they would bring out our orders as soon as they were ready. We had the corresponding menu that explained the dishes and all we had to do was select them on the tablet. I was a little worried if my super picky companion would find anything on the menu. But, there were so many different things to choose from that even he was more than happy.

We quickly got our drinks, and our waiter helped us to send in our first order of entrees. One of the things that made my day, was that you can order everything in small portions. You can literally eat your way through the entire menu. Everything is served within minutes and made fresh, either in their kitchen or the sushi bar right inside the restaurant. Every dish that was brought out was nicely dressed and was visually pleasing. The food tasted great; it wasn’t over seasoned, and they brought out a nice tray of pickled ginger, wasabi and soy sauce for the sushi I had ordered, too.

You can order a total of 10 little dishes at a time, in 15-minute intervals. The first round went down quickly, and we decided on a second round. My husband also decided on one of their Japanese beers to match the food. For our second round, we decided to be more daring and went for dishes that aren’t very common at your normal go-to Asian restaurant. Again, we were not disappointed, and everything was delicious.

After eating I wanted to check out the inside of the place. I was a bit surprised how large the restaurant actually is; it looks much smaller from the outside. But, there is a large dining area, tastefully furnished in modern contemporary, yet still Japanese style furniture with lots of dark, warm, wood colors and bamboo. From the comfortable booths to smaller couple tables, everything was tastefully set and clean. The sushi bar, located at the back, is open for spectators who like watching food being created. 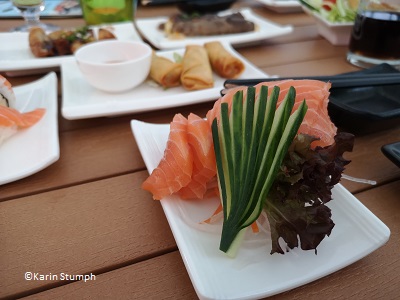 The restaurant also has a rather large party and event room that is available for booking.

When I returned to our table out on the patio, my husband decided he wanted to try the deserts. Normally, this would be nothing unusual, but…

Mikomi offers some very unique ice cream flavors, alongside the traditional ice cream and little cakes and puddings. We were intrigued by the black sesame, green tea and red bean flavors. So, we decided on the black sesame ice cream and were totally blown away by its flavor. Not quite sure what to expect, we each put a small scoop in our bowls and tasted it. It had a very surprising chocolaty note, delicious!

After desert, we chatted a bit with the nice couple at the table next to us and our waiter. What a pleasant experience.

The only regret I have, is that we live so far away!

If you want to check them out, Mikomi is located at the Schwabengalerie, Schwabenplatz 3  70563 Stuttgart, or check out their page here: https://www.mikomi-sushi.de/en/mikomi-sushi/