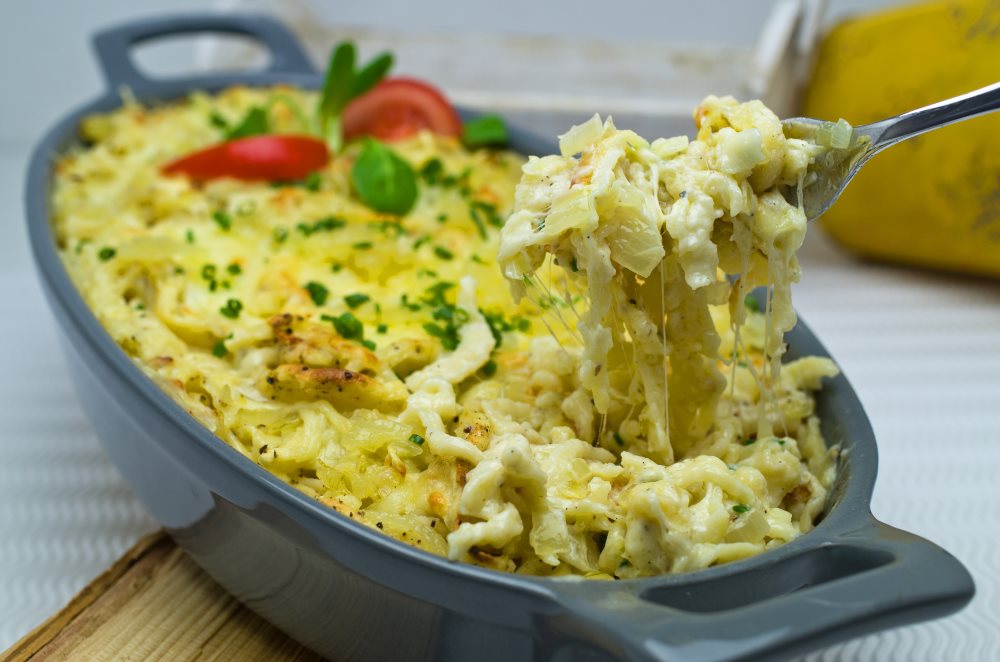 A hearty dish, I've calculated really big portions. I have not skimped on the cheese either, a lot of chives and plenty of onions give your meal the extra kick.

In addition, you can have some leafy greens on the side. This time I made the noodles in the oven, which also works very well in the pan, the cream can also be left out and bacon can certainly be smuggled into the cheese-spätzle. I like the following recipe best.

From the above ingredients make a smooth, but not too thin dough and let it rest for about 30 minutes. Then scrape thin shaped noodles from the Spätzle Board in slightly boiling salt water. Scraping requires some practice, therefore, also a spätzle press can be used (you can buy one on Amazon). Once the noodles swim above the water, take them out with a sieve, rinse them in cold water and put them on a tea towel to dry.

Put the finished noodles in a suitable oven-dish. Now pour in the cream, sprinkle the grated cheese on top and season with salt and pepper, but be careful, the cheese also has a strong seasoning. Mix it all together, spread some butter flakes on top and bake in the oven at about 180-200 degrees Celsius (360-390 degrees Fahrenheit) for 30 to 40 minutes. The top layer should be brown and crispy! Finally, sprinkle the chives on top of the finished cheese-spätzle.