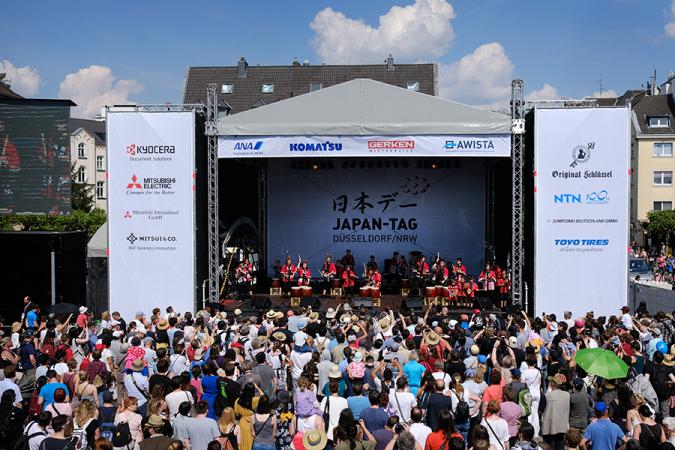 On May 25, 2019, Duesseldorf, the traditional stronghold of Japanese business in Europe, is expecting several hundred thousand visitors from near and far. Duesseldorf is the most important city for Japan in Germany, and therefore, the location for the largest Japanese cultural celebration outside of Japan. The festival is being prepared with great care by Duesseldorf’s Japanese community. The city is home to around 7,000 Japanese nationals. Japan Day will be held, as always, right along the Rhine River, right in the city of Duesseldorf (in North-Rhine-Westphalia).

With over 700,000 visitors, Japan Day is the largest one-day event in the state capital. Every year so far, Duesseldorf has been quite successful in compressing Japanese culture with all its colorful facets into one day, to give visitors a taste of Japanese enchantment. Experience modern day and century old tradition right here on the Rhine – with classical and traditional music, sport presentations, a Samurai camp and lots of information for travel and school. If visitors are interested in trips and tourist destinations in Japan, this will be the place to be. The booths will be opening at 12pm with at least 20 stands offering authentic dishes and culinary delights straight from the land of the rising sun. Ramen, Sushi and co. are sure to delight hungry guests. Kids can partake in origami crafts and many other activities. Anime, Manga and cosplay fans won’t be disappointed either, participating or just checking out the work of others; the options are plentiful. 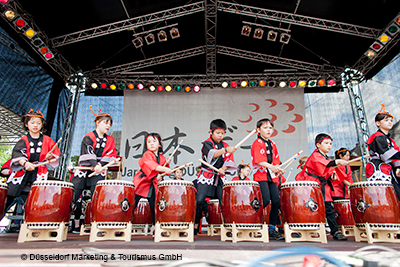 Altogether, there will be about 400 actors and musicians performing on the stage set up on the Burgplatz, which is not counting all the helpers and volunteers working in the background. The Japan Day will be keeping visitors entertained with its nine hour long program and many performances.

This year marks the 17th anniversary of the celebration, and as always, the grand fireworks display in the evening will be the highlight of the day. Thousands of people are expected to watch the show from the banks of the Rhine River, start will be around 11pm. This year’s theme for the pyrotechnical show is “art and culture.” To set the mood for the dazzling display, the musical main act, the SAMURAI J BAND, featuring Rica Sato, is performing. The quartet is playing on traditional Japanese instruments and can give even modern music pieces a whole new sound.

Some of the local hotels do offer Japan Day packages including boat tours on the Rhine River in time for the fireworks show.

There are several public parking garages in the vicinity, but it is advised to arrive early. Recommended are the public parking areas at the Barbarossaplatz (Luegallee 65), downtown in the old city center at the Dreicubenhaus (Gartenstraße 2) or at the Immermannhof (Karlstraße 76).

The Japan Day is held:

At the Burgplatz and Rhine promenade

For more information check out: