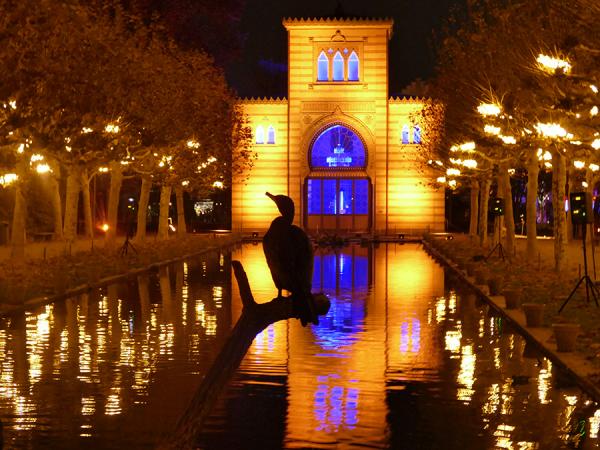 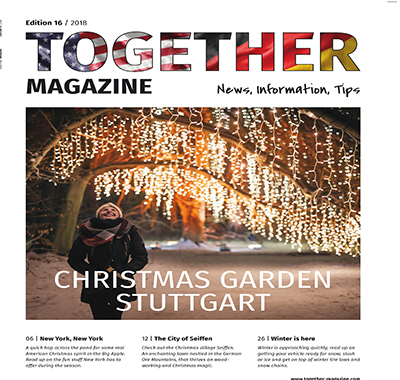 “The magical journey begins at dusk” - that’s the theme the Wilhelma will go by when the Christmas Garden Stuttgart opens their doors to visitors on November 15th.

This last Saturday was the long-awaited grand opening of the Christmas Garden at the Stuttgart Wilhelma zoo and botanical garden. Since the last Together Magazine edition ran with the Christmas garden as cover story, we were invited. We met up a bit early to scout out the set up and soon enough quite a crowd gathered anxiously waiting for the officials to show.

There was a nice set up with delicious finger foods, appetizers and drinks that we were able to enjoy.

After a few speeches by the creators, the zoo representatives and the hosts, the official countdown started. At 7 pm, with a great round of applause and cheers, the Stuttgart Christmas Garden opened its gates!

As soon as the doors opened, we headed into the park. The path through the Christmas lights will take about and hour and a half to two hours, depending on breaks and pit stops. 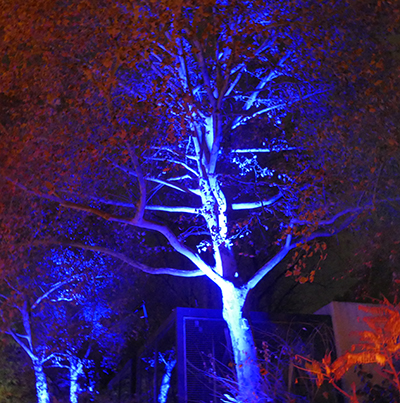 The beautiful Moorish structures were breathtaking with the lights reflecting off them. The old redwood trees that were once planted by King Wilhelm the 1st are illuminated, turning the place into a magical forest. The garden is decked out with twinkling light bulbs, lakes are adorned with sparkly waterlilies while all of it accompanied by lovely Christmas tunes. Tasteful and not corny how some people had speculated. Throughout the whole experience are little food and drink booths selling Gluehwein, waffles or like this one stand, fresh marshmallows you can roast right on the fire pit next to the stand. Be sure to check out the little special set ups, like the romantic bench that has the mistletoe hanging above it.

The VIP guests that had the honor of doing the first rounds in the garden were delighted. The planners of the Christmas garden, the Light designers of the German Entertainment AG, received plenty of praise for their work. The management of the Wilhelma zoo made sure the animals of the zoo itself won’t be disturbed, since the lightshow is located mainly in the botanical garden.

The botanical garden will be open daily from 5pm until 10 pm for the Christmas Garden. Regular zoo visits are not included in the tickets.

But I won’t tell you too much more, you have to see it for yourself, really!

Originally started in 2014 in the United Kingdom, this light show has become a beloved and staple part of the Christmas season there. The Royal Kew Garden is the botanical garden in southwest London that houses one of the largest and most diverse botanical and mycological collections in the world. It made for a great location to start up the show that grew into an international phenomenon. The 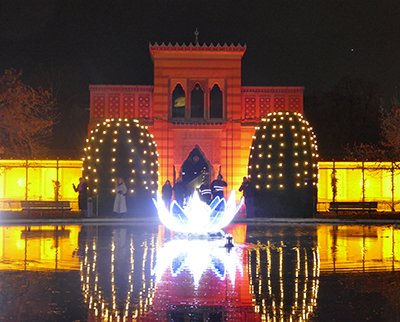 gardens started it all with a light show, sparkling green house and Santa Claus. By 2016 it had gotten so popular that Germany joined in, with Berlin. The Capital of Germany started with their botanical garden and turned out to be, with over 250,000 visitors in two years, a huge success. So why stop there?

The romantic Moorish garden in the Stuttgart, Wilhelma botanical gardens, with the mystical Moorish architecture, really does make for the perfect backdrop of a sparkling winter dream. Visitors can look forward to experiencing breathtaking light games and figures on a beautifully set up walk around the botanic garden. The tour is about two kilometers long and the perfect stage for a romantic evening out or a tranquil and magical stroll with the family. Millions of 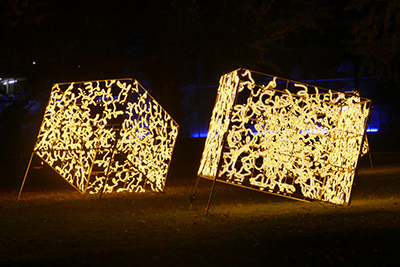 little lightbulbs and strategically placed light sources are guaranteed to take everyone into a winter fairytale land.  This light spectacle is the first of its kind in southern Germany and ticket presale has already started.

The Christmas garden makes for a nice alternative to the over crammed Christmas markets and shopping madness and crowds. The sparkling botanical garden will be the perfect oasis to get away from the stress. Synchronized music alongside dancing colored lights makes for spectacular displays.

When the gardens in Kew, near London, started it all, it really became apparent how much people were yearning for peace and calmness to reduce the stress that Christmas causes in the meantime. Kew is famous for the lighting and music of their ornate greenhouse, so it will be exciting to see what the artists create in the Stuttgart gardens. 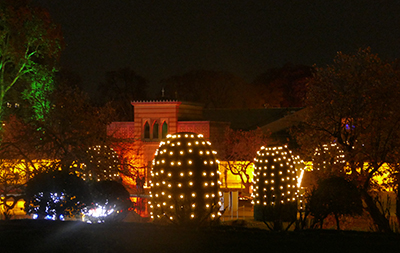 Prof. Peter Schwenkow, CEO of the DEAG Deutsche Entertainment AG, who runs the Christmas lights said, “The Wilhelma does make the perfect stage for the Christmas lights, with its huge layout, the garden set up and especially the many wonderful Moorish buildings.” The unique Arabian style did give the garden the nickname “Alhambra along the Neckar” after all. The team of light designers has worked out elaborate plans of how to put the Damszener hall and the Moorish country house into the scene, and they are not stopping there. Even some of the animal enclosures will be included in the set up. There will be stands that sell snacks and warm beverages, like mulled wine, to round out the perfect winter wonderland walk. There will be beautifully lit trees and glowing boats on the water, and, of course, Santa and his reindeer will be in the scene, too.

Stuttgart’s Wilhelma will open the Christmas light gardens starting November 15, 2018, and go until January 6, 2019. Opening hours for the magical lights are 5pm until 10pm daily. However, do note that the light show will be closed December 24th and 31st. It is also important to mention that the regular seasonal tickets do not cover the Christmas lights. Buying tickets in advance has proved to be a good idea, especially if the visit is going to be on the weekend. Since the park will be dark, besides the light displays, feel free to bring a flashlight if needed. Also dress warmly and bring an umbrella if rain is in the forecast.

The park is wheelchair accessible and service dogs are permitted.

Public transportation is always a good idea when heading to the Wilhelma since parking can be a challenge, especially on the weekend.

For tickets, check out: