The undead in Germany 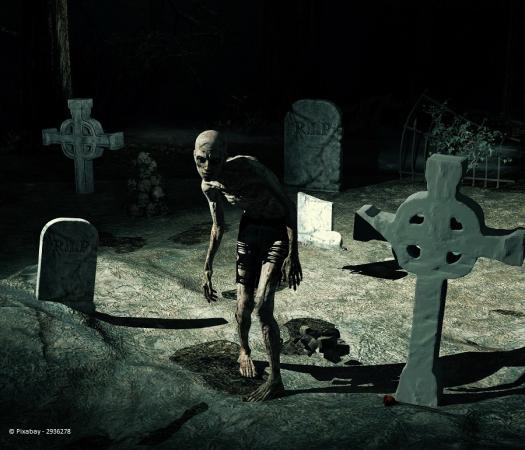 Today, we know zombies are a thing of imagination, seen only on TV shows and in movies. Really, the only ones scared of them these days are probably little kids. However, for our ancestors here in Germany, that fear was a very real one.

To make sure the deceased stayed deceased, the Germans back in the day took some harsh measures. Archeologists in the state of Saxony-Anhalt discovered some interesting finds when they unearthed an old cemetery from the 6th century. The scientists where thrilled to have found such a promising location. Some of the graves still had weapons and there were even three horses buried along with the dead as a passing gift. 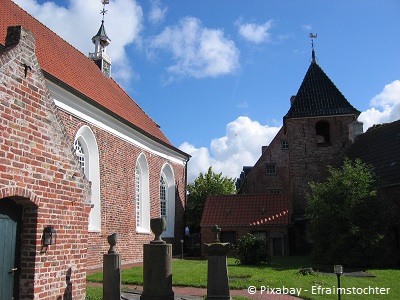 Until they discovered a very particular grave… the man wasn’t, unlike the common Christian graves, buried laying on his back, but laid to rest face down. His hands were not peacefully folded in prayer, but tied together at the wrists. A large iron bar rested on his back.

Pretty soon it was evident, that the scientists found what they called an “undead,” or better yet, someone that was considered by his family a danger to return from the dead. Obviously, they did their very best to keep him buried. Even if he would have awoken, he would have never been able to dig himself out of the grave. He would have only dug himself deeper into the ground. Additionally, the iron bar, that was found on his back, would have probably been stuck in his chest to pin him down.

For a couple years now, archeologists have been unearthing more and more so called “undead” on their digs – since it has been relatively new to even check out old cemeteries. Before, those locations weren’t of much interest, since the traditional Christian burial did not wield any valuable items. Plus, no renowned scientist would have admitted that he might have found a so called undead, in fear of being bullied by his peer. Only now that the understanding of the field of archeology has changed, and it’s not all about finding treasure anymore but understanding the historic everyday life, the so-called undead burials are appearing in journals.

The trained eye doesn’t identify the undead by their sharp fangs or bloody foam at their mouths – but by the actions the people who were left behind took. Not all the signs are as easy to tell as the iron bar. A prayer, or holy water and garlic cloves, will disappear over time.

But, there are graves that warn the scientists vividly. A popular way to keep the dead dead was weighing them down with heavy rocks, a wooden (sometimes even iron) stake through the heart. Even though the wood is long disintegrated, the obvious tell tales are still left behind. The chest cavity above the heart is broken. Another sure way to keep the deceased in the grave was to remove the head and place it between the dead’s legs.

The people have always worried about the dead rising. People believed in the undead across all times and cultures. The oldest examples are from the Stone Ages. Ever since then, the undead have been on people’s minds; old legends and tales are full of them. 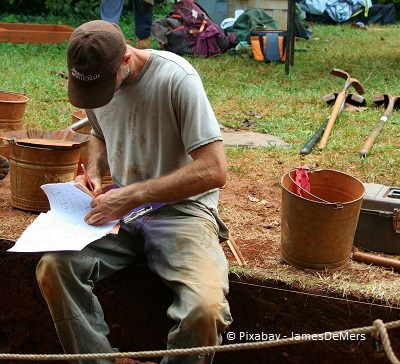 Back in the day, there where many ways to turn into an undead: If the carpenter forgot to add some wood shavings in the casket, or the tailor forgot to add the needle he sowed the death shirt with to the casket, or it dropped through the wooden boards, if the servants were too busy and did not manage to extinguish the home fire in the hearth after the body was picked up, or someone stole a coin given to the dead. There were also plenty of bad things that could happen to you while you were alive that even put you in danger of becoming an undead, like having the wrong birthday (during the time period between Christmas and New Year) or being drawn to alcohol and gambling. Suspects could also be twins, people with deformities or mentally disabled folk; they were not to be trusted.

It is unknown how many people were actually declared undead. There are only a few statistics, but one of them is from Berlin. The area where the airport is being built was formerly the home to a village called Dippensee. This little town was relocated in 2004 to make room for the new airport.

Archeologists got busy and excavated the cemetery that had many graves dating back to the 13th and 14th century, after the village was deserted – probably caused by the black plague. Scientists discovered 422 dead and 25 of them (almost 6%) were buried with preventive measures to keep them from returning. The villagers had done their very best to keep those people in their graves, with rocks weighing them down, having them turned onto their stomachs and/or having their legs or head cut off. How many were also covered with garlic or holy water is unknown.

So, even if it was only 5-10% of the population that they worried about returning as undead, it is pretty certain that almost everyone knew at least one person that was cursed. The undead are no legend… they were a living, breathing part of everyday family life in Germany.