The 200th birthday of the bicycle 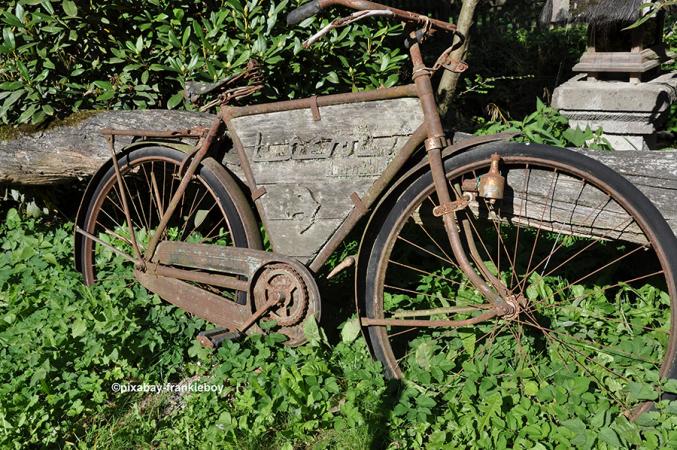 The bicycle is celebrating its 200th birthday on June 12th this year. This popular vehicle has quite a moving history. 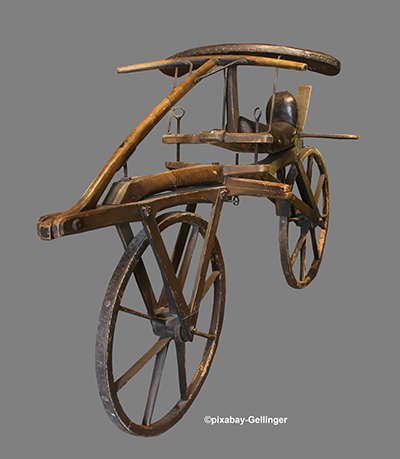 The bike was born in Mannheim. Karl Drais, originally from Karlsruhe invented the predecessor of today’s bike out of desperation. Oats and feed for horses had become increasingly expensive due to war and famine. Many struggled to feed their horses. The need for a new means of transportation arose. The inventor Karl Drais decided to tackle the task to come up with just that – a means of transportation you could sit on and push yourself using your legs. The Draisine- the grandfather of modern bikes was just that - an upholstered wooden beam, a steerable front wheel and a simple break. With that vehicle people were much faster than pedestrians and were even able to pass the postal carriages. Karl von Drais, is said to have traveled the 50 kilometers long trip from Karlsruhe to Kehl in 3 hours. In the end the Draisine did not make the cut, it was too expensive and uncomfortable on the bumpy cobblestone roads.

The development of the bike was at a standstill for a couple centuries, until 1861, when in France it was outfitted with pedals. It’s not clear which inventor did think of the idea, but it was probably Pierre Michaux and his son Ernest Michaux. Going by one tale, Pierre Michaux added the pedals to one model because his son tired over long distances on the bike. They also decided to switch from a wooden frame to a metal one. The frame was now made out of forged cast iron and the seat has springs for comfort. They named their bike “vélocipède bicycle“, which roughly translates to speedy feet. Their 2 wheel contraption caught a lot of attending at the world fair in Paris in 1867.

The next big update on the bicycle came from England. The manufacturer James Starley and William Hillman tried to come up with new ways to make the bike faster. Their solution, make the front wheel much bigger. The cyclist now drove much longer strides per turn of the pedal. The back wheel in turn became much smaller – also to assist the mounting of the bicycle. In the end the high wheel “Ariel” was much faster than the earlier models. Additionally to that the wheel had hub rims, steel spokes and solid tires made from rubber. It did take a lot of skill to ride that bike. Many riders did tumble off and injure them self, because of the high drop. That did not keep people from organizing daring bicycle races. One of them did happen in Paris-Roubaix and is still being held to this day. One of the biggest challenges is to ride across the bumpy cobblestone roads, just like they did in the old times. 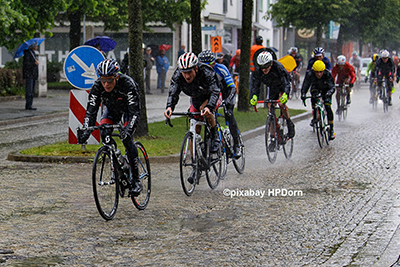 The English engineer and bicycle producer John Kemp Starley, that was the grandson of James Starley, wanted to modify the development of his grandfather. His goals were: improve safety and better usage of the muscle power. For that he invented the “Rover Safety Bicycle”. It had 2 larges wheels, a chain and an adjustable saddle. The audience was skeptical though when he first announced his invention in 1884. The press dubbed the bike as “beetle” or “crawler” because of its low high. Not until Stanley hosted a race that made the top bicycle racer George Smith a new world record holder, the bike was able to establish itself. The basic design has not changed much since then. The high wheel bike became part of history though. One of the first races started in Paris and ended 250 kilometers later in Robaix. This race still happens today and is one of the most important bike races worldwide. It is held annually on a Sunday in mid-April in northern France and is referred to as the “Queen of the classics “ or “Hell of the North” .

The final breakthrough was the invention of the inflatable tire in 1887, by the Scotsman John Boyd Dunlop. That made riding much more comfortable. Bike riding had become a mass phenomenon by the end of the 19th century. Other additional technical improvements were made with the addition of a mechanism that prevented the pedals to spin with the tires and shocks on the saddle. Mass production made the bicycles affordable for everyone. Even normal blue collar workers now had the chance to take trips further out of the area. In the USA the bike became a symbol for feminism: “Let me tell you what I think of bicycling. I think it has done more to emancipate women than anything else in the world. It gives women a feeling of freedom and self-reliance. I stand and rejoice every time I see a woman ride by on a wheel...the picture of free, untrammeled womanhood” was once said by Feminist Susan B. Anthony, before she died in 1906. The bicycle industry even changed woman’s fashion, gone was the hoop skirt and the first trousers for Ladies, were bicycle trousers. 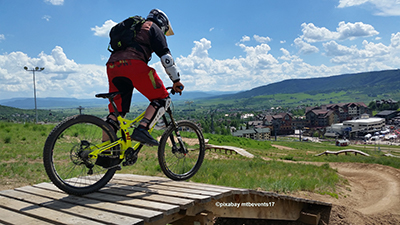 In today’s times, you won’t find a bike build without at least a couple different gears – with the help of different sized “gear ratios” the chain can be moved between the different gears and sit on top of the teeth of the gears, thus optimizing the power of your leg muscles even when you go up hill. The first gear transmission on bicycles was introduced in 1927, with the addition of several gears on the back tire.

The bicycle even created new jobs. Especially popular in the USA are – the “bike messengers”. Back then, many households did not have telephones yet, so the bike messengers were great way to get news in form of telegraphs out. Besides messages and news bicycle curriers are used to deliver all sorts of goods. They are a very familiar sight in today’s modern cities. Faster and more flexible then cars they can daringly maneuver through the congested streets without having to worry about traffic jams.

With the development of the cars and motorcycles the bikes were hit with some big competition in the 20th century. Here in Europe it even became almost forgotten right after the Second World War. Back in the 50’s everyone had to have a motorized vehicle. Motorcycle, scooter or the first car- those were on everyone’s mind. Then, towards the end of the 60’s interest revived for the beloved bike. Bonanza bikes and foldable bikes were more popular than ever. I can vividly remember how proud I was when I got my Bonanza Bike as a young kid, the so called banana saddle and the gear transmission on the frame, oh boy, I felt like a king! In the 1980’s the invention of the mountain bike and the work out wave in the USA created even more interest in the bike. People today, love the bike for its flexibility, the environmental benefits and the possibility to work out while getting from point to point B. Cyclists also rarely run into parking problems, since one car sized spot can fit up to 12 bikes.

The E bike or Pedelec 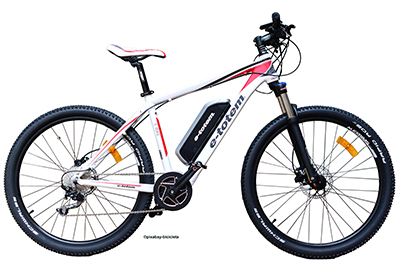 Cycling can get exhausting; this is why even back in the 19th century several inventors tried to motorize the bike. Looking though old patents you can find papers that show even back in the 1895, the fists bikes in Europe and the USA with an electric motor. It’s widely accepted that the Japanese Konuske Matsushita, was the father of the idea of the modern electric motor. In 1975, the Panasonic founder introduced an e bike in Japan that, reminds us very much of today’s engine. There was a battery behind the saddle pipe and a motor at the bottom bracket. But not until the invention of the small screens and long lasting battery packs toady’s e bike became what they are today: a bike with a sensibly run electric support fitting any need. Pedelec stands for Pedal Electric Cycle and describes a bike, which is run of muscle power in conjunction with an electric motor. The motor only kicks in while the pedals are used. The support of the engine has to be capped at 250 watts and the speed cannot exceed 25 km/h. These regulations are based on the street laws, where this is the only way the Pedelec can be equal to a bike and does not need liability vehicle insurance. Your personal liability insurance, that everyone should have, does cover any damages you may cause to other people or items. Just like a regular cyclist, the Pedelec rider has to use the bike paths’, when it’s advised so by a blue bike path sign. Another Pedelec is the so called S-Pedelecs, the only difference is that the engine does not cut off at 25 km/h but runs through until 45 km/h is reached. The engine cannot run at more than 500 watts. S-Pedelecs are, just like e-bikes, no bikes, but are mopeds by law. Cyclists have to attach an insurance license plate and have to hold a driver’s license with the class “AM”, which requires the moped driving test. The driver’s license class was known as “M” before 2013. Any German car license does cover the “AM” class by the way. Additionally to that there is a helmet law since 2013. The S-Pedelec is also not allowed on bike paths and has to use the street instead.

Where is the best place to buy a Pedelec or e bike? 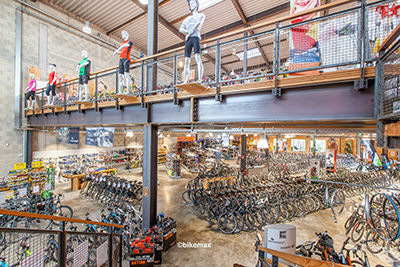 There really is only one right answer to that – your local bike shop. Why? Because you can’t really try a bike you buy online, to be sure it’s the right fit, size and, or comfortable. We have checked out several bicycle dealers in the Stuttgart region and would really like to recommend the company Bikemax to you. Located in Sindelfingen, right across from the IKEA Parkhouse, is 1 of 24 Germany wide Bikemax branches. Many of the employees speak excellent English; they accept credit cards and of course VAT forms. If you decide to purchase your bike there, you can also enjoy these other benefits:

Here are some fun facts about the bike:

The most important thing is:

You have to watch out as cyclist, next to pedestrians they are the most vulnerable road users and accidents usually do not end well. This is why: always drive defensive and count on cars, motorcyclist and truck drivers making mistakes. Of course every cyclist should be wearing a helmet when they go out to ride, because even at slow speeds a head on collision can be fatal.